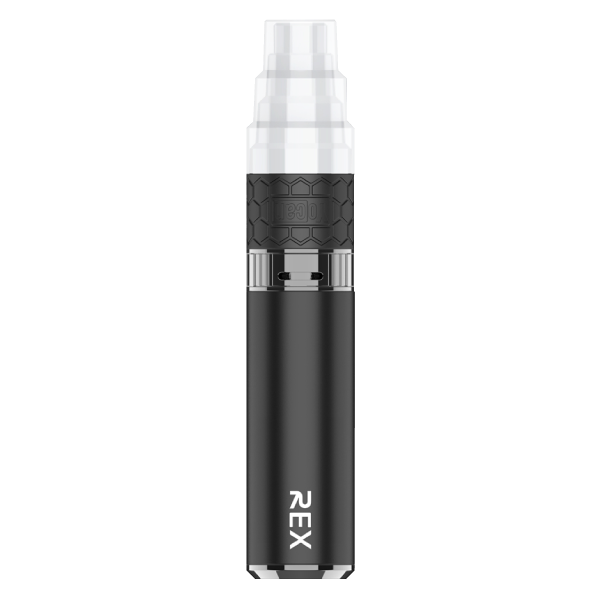 4.8 4.8/5
The Yocan Rex is an e-Nail designed to replace the old banger and nail and works with any water pipe. It's got a simple single-button interface and features Yocan's signature Quartz coils. The 1400mAh battery is good for about 100minutes of use, and charges via the more stable USB-C.

Yocan (visit store) is probably one of the busiest vaporizer manufacturers out there. Their line-up of products is stocked to the brim with nearly everything any user needs – regardless of the type or class of vaping that you’re into. They’re the creators of box mods such as the Yocan UNI (review) and eNails like the Torch (review).

The Yocan Rex is a portable e-Nail designed to work with any water pipe. Much like all of Yocan’s devices, it’s pretty easy to use – with a single button to control any of its three pre-set temperatures and to turn the device on or off. It also has Yocan’s signature Quartz coils and tiered connector that’s made to fit any glass water pipe. The entire device is made from stainless steel and also features a LED light indicator, adjustable airflow valve, and a 1400mAh battery that charges via USB-C.

Yocan is a pretty no-fuss and frills brand. Each device they make comes with a relatively standard kit, and the Rex is no different. The entire kit consists simply of:

Compatibility: The Yocan Rex is compatible with wax concentrate and almost any rig available. I used it with CBD dab from Steve’s Goods and from In-Hemp and a rig from Higher Standards.

The Rex is pretty straightforward – it’s a cylindrical pen-style device that’s definitely portable at only 4 inches tall. It’s able to fit in any pocket or small purse. The entire device body is constructed with stainless steel and the battery has a satin-like finish. I definitely prefer this over the powder-finish on other Yocan devices – which for some reason cheapened the look of the vape.

The Rex is somewhat divided into three main pieces. The battery, coil, and the water pipe adapter.

Battery: The battery accounts for 70% of the entire device and located at the top of the battery is the power/firing button with an LED ring around which indicates the current device temperature. The airflow valve is at the end and can be adjusted via a small notch.

The battery has a capacity of 1400mAh which is good for an hour and forty minutes or 100 minutes of use and charges via USB-C. Definitely a big upgrade over the usual Micro-USB, USB-C is more stable and delivers power a lot faster than that dated cable. The port is located a little below the battery.

Quartz Coil: The outside of the quartz coil is lined with a silicone, honeycomb grip which does a pretty good job of keeping the heat at bay while you’re using the Yocan Rex.

Water-pipe connector: The tiered water-pipe connector is something I’ve already seen on the Yocan Torch and it’s designed to fit 14mm and 18mm ground joints. You can also use the bottom connecting piece as either a male or female adapter. It also comes with a silicone cover to keep the connector free from dust and dirt when not in use.

Using the Yocan Rex is pretty easy – it features a single-click start and stops. A short press of the button turns it on and is indicated by a flashing white light. To cycle through the pre-sets, simply press the same button 3x fast.

As mentioned earlier, the Yocan Rex features three pre-set temperatures as indicated by the LED ring around the button – White: 3.2V, Blue: 3.7V, and Green: 4.2V.

Vapor Quality: The Quartz Triple Coil is something Yocan puts in all their concentrate devices and performs just the same on the Yocan Rex. The temperatures on the Rex aren’t exactly very hot, it’s definitely less hot than burning your concentrate- but these low temperatures actually produce some very good vapor that’s rich in flavor.

The vapor quality though is greatly aided by the water that’s in your pipe. Filtering vapor through water rids it of impurities and cools it down even further. So even if you blast the Rex onto its highest temperature, you might get just a little less flavor, but still the coolest vapor.

Adjustable Airflow: The small valve at the base of the battery allows you to control the draw resistance in the device. Slide the notch to close the valve for a fuller hit, and do the opposite for lighter vapor.

The Yocan Rex is priced at $50 and definitely does a great job of replacing the old-fashioned torch set-up. It’s got all the features you’d need for a great session and to get good draws out of your concentrates. Its easy and simple operation takes a lot out of the process and makes sessions a breeze.

Although its portability is somewhat of an oxymoron – at only 4 inches tall, it’s definitely something you can take anywhere- provided that wherever you’re headed, there’s a water pipe waiting for you. If you’re looking for a more all-in-one device, definitely check out the Linx Apollo (review) or the Puffco Peak Pro (review). Both of which have their own built-in water bubblers. There are also more devices worth checking out on our Best E-Nails List. 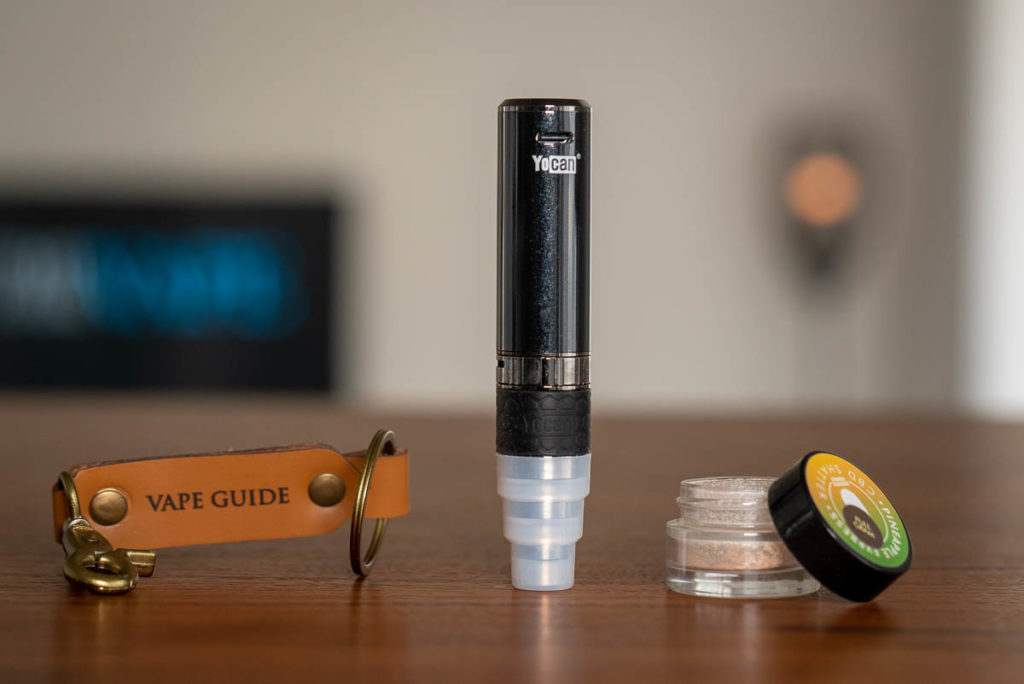 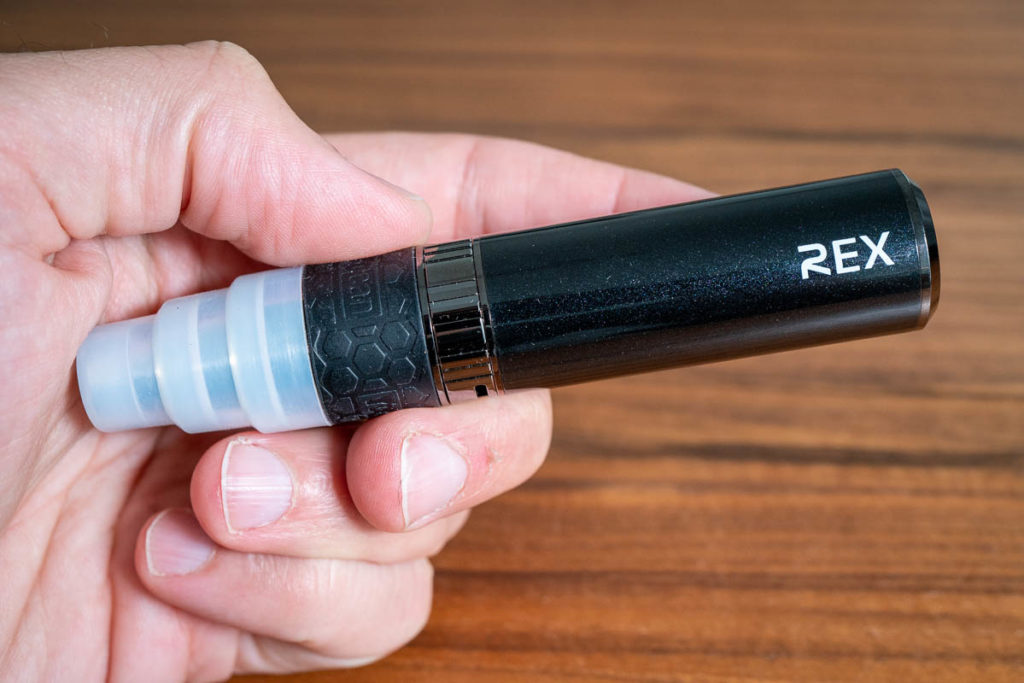 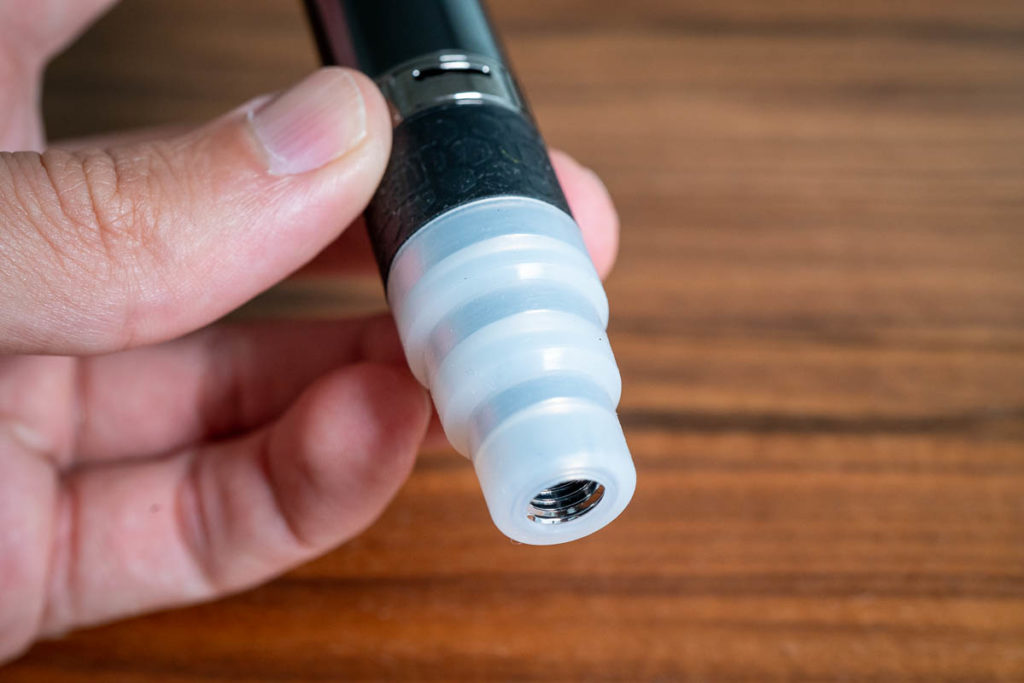 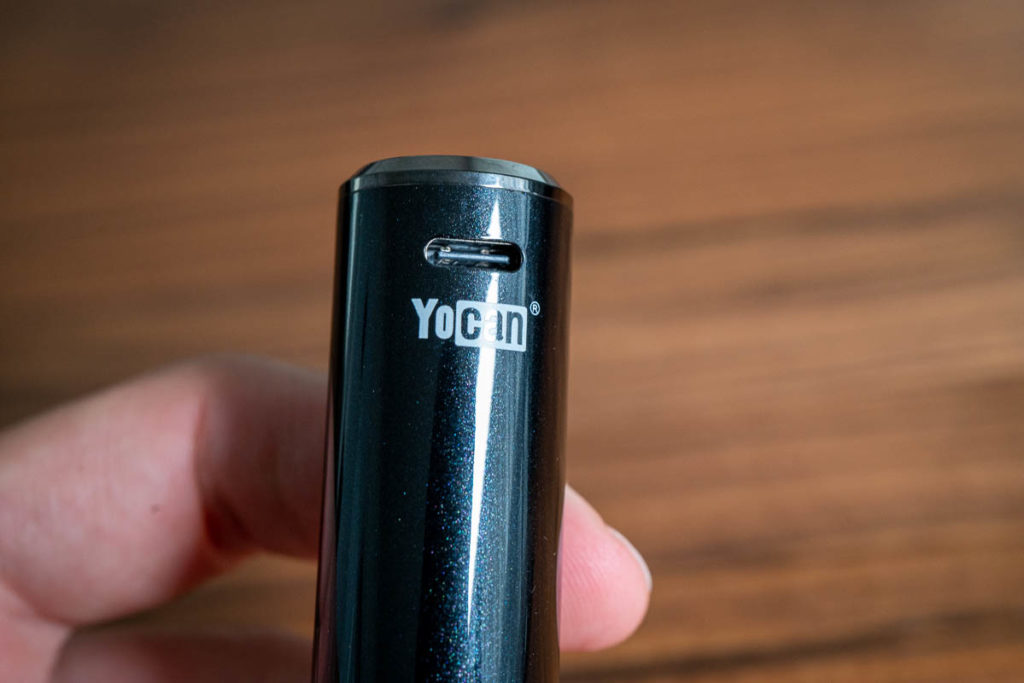 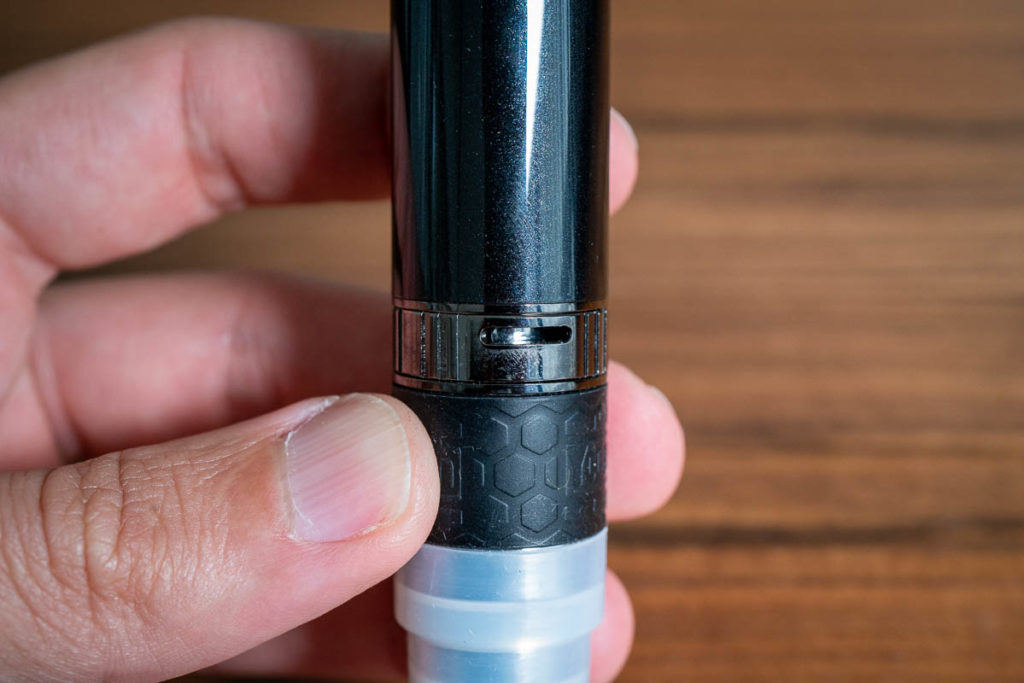 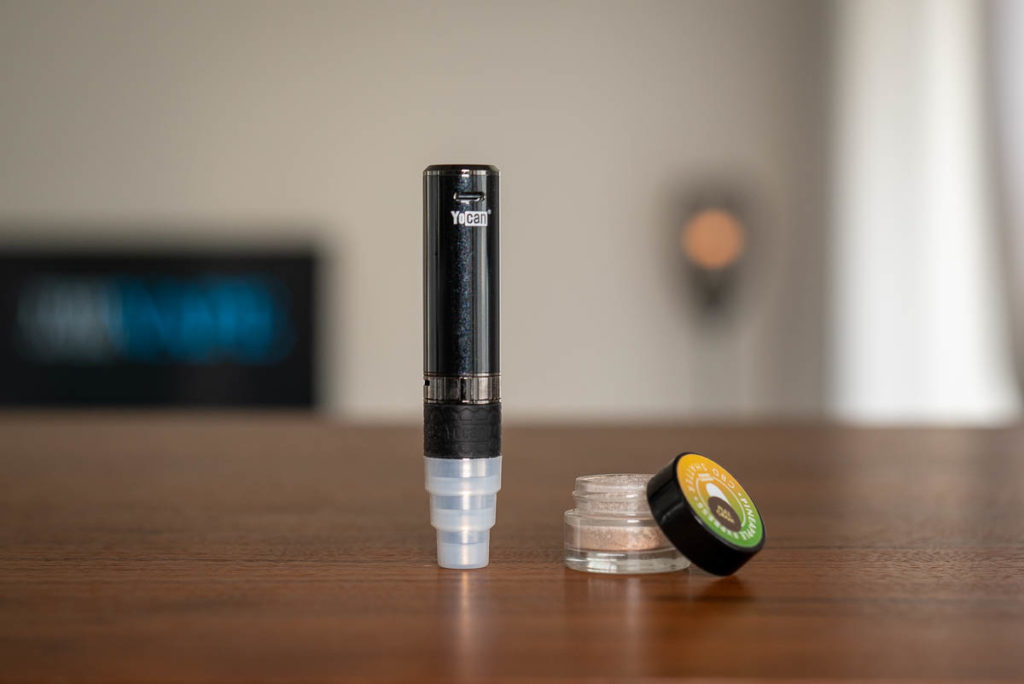 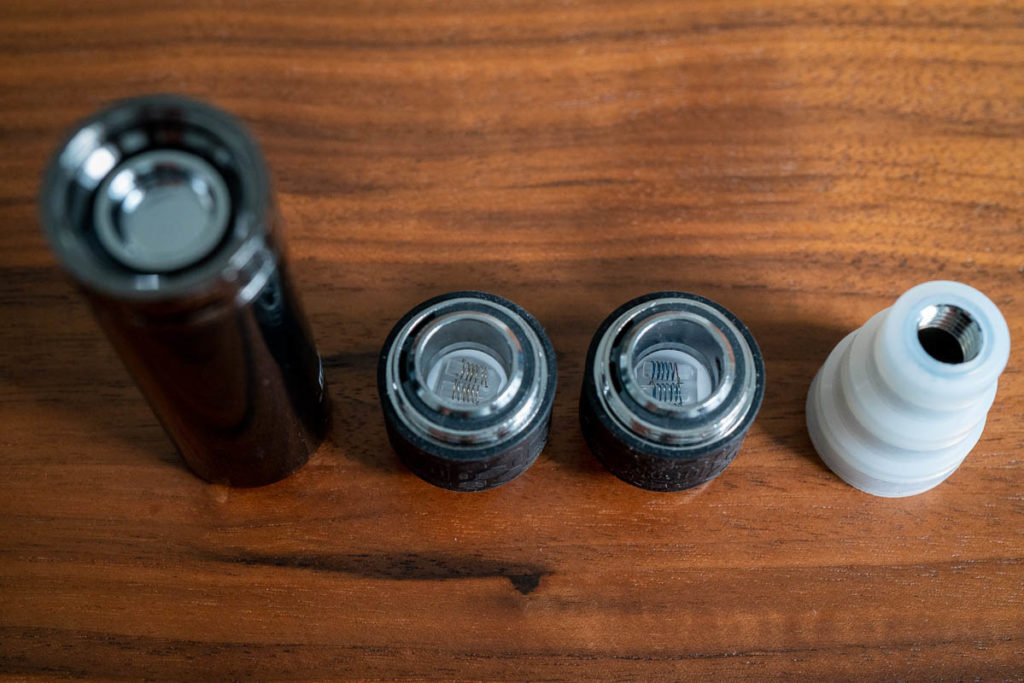