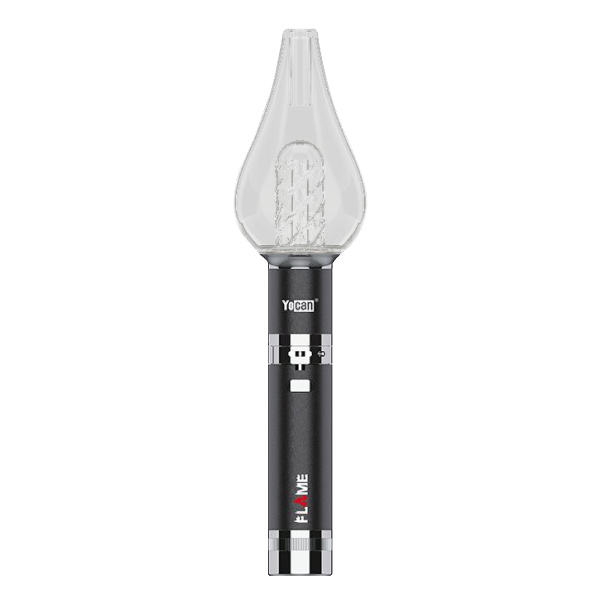 4.2 4.2/5
The Yocan Flame is a feature-packed vaporizer, with several inclusions in its kit at a very affordable price. While it is primarily a wax vaporizer and the Honey Straw feature is secondary - this is one of the few devices on the market that serve this dual purpose. It’s a great device to have if you want something that has water filtration - without breaking the bank.

With produes that seemingly serve each class in the vaporizer market – Yocan is a manufacturer that is never in short supply of new products. Creating concentrate vaporizers like Regen (review), Explore (review), and the Armor (review) vape pen, and the Yocan Hit (review) dry herb vaporizer. This mass design and production, and accessible price points are what keep Yocan very popular in the niche.

Their latest wax concentrate vaporizer- the Yocan Flame (visit store) is the newest in their line of portable wax vaporizers and its features are an amalgamation of those that are found in other Yocan dab pens, wax vaporizers, and portable eRigs. The Yocan Flame is a multi-functional device, working as both a portable dab pen as well as a portable Honey Straw.

The Flame also has two interchangeable coils- Quartz Dual Coils (QDC) and the XTAL Coil (crystal), a water bubbler, a 1400mAH battery, a sneaky little dab container at the bottom of the device, and a titanium rod for when the device is used as a honey straw. Though the device might seem like it has a lot of parts, it’s all easily secured together by magnetic connections.

The Flame bears quite a similarity to the Utillian 5 (review), so they’re compared in this review to help you make a more informed choice regarding which device you think is best for you.

Compatibility: The Yocan Flame is compatible with wax concentrates. I used it with CBD dab from InHemp (visit store) which is legally shipped anywhere in the USA.

The device comes in a fairly hefty box, and everything inside is well protected by foam padding. So, if you’re carrying your fresh purchase around a bit, you’ll breathe easier knowing everything is secure in there.

What’s in the box:

At first glance, you’ll understand right away why the device is called Flame. It literally looks like a candle when the water bubbler is on. The spiral design inside the bubbler also resembles a flickering flame when hit by light. Based on this alone, I’d say that the Yocan Flame makes for a very interesting collection and conversation piece.

As far as portability is concerned, this is not really a vaporizer that you take on a trip. The glass bubbler and lack of a carrying case alone are enough to get you worried about breakage. But as mentioned above, the box the device comes in does have foam inserts, so you might be able to re-use that, you’ll just have to exercise a little extra caution.

But the device on its own does seem pretty strong- the casing that houses the Yocan Flame’s battery is made out of durable metal with a semi-matte finish. The end pieces and attachments are also made out of metal and are inlaid with magnets that are designed to “click” the pieces in place. At the bottom of the device is a little dab container with a separator in the middle, so you can carry two separate extracts.

The interchangeable coils are an added feature for this vaporizer. Each coil delivers different vapor and flavor quality.  The two coils included with the Flame are;

Underneath the coils and sitting above the battery is the airflow control. Having this feature allows you to control the draw resistance in the device. Increasing the airflow will cause more air to pass through the coils resulting in cooler, lighter vapor. While decreased airflow will produce denser and more flavorful vapor. For a device at this price, this is a pretty good feature.

The Yocan Flame has a 1400mAH battery, similar to the Yocan Evolve Plus XL (review) – but unlike the Evolve XL, the Flame features a USB C charger, which means it’ll charge 20x faster than the usual micro-usb you see on most devices. The pairing of this battery + USB C charging provides your device with enough power to last through long sessions and will be able to sustain stable power delivery throughout.

In the vaporizer market, most products serve two or more purposes. Basically, versatility is key and the Yocan Flame seems like one of a very few products to feature a Honey Straw/wax vaporizer with a water bubbler. It’s a complex-sounding combination in theory since the honey stick does require an actual blowtorch (buy on amazon) to use, but it’s relatively simple to switch between those two functions on the device itself.

Here is a quick breakdown of how to use both these functions on the Yocan Flame. It’s important to note that when using the Flame as a Honey Straw- you’ll need a blowtorch / any open flame source. Please be cautious when using the device this way and when handling open flame.

As a portable wax vaporizer

As a Honey Straw

With the two coils, airflow control, and the titanium rod at your disposal, you’re guaranteed different experiences depending on the attachments you use on your device and how you use them. Both coils function very consistently, providing the quality of vapor with every hit. This consistency is due to the fact that the Flame’s battery only offers a single heat setting. I think this is great if you’re a beginner since it’s pretty simple to use, but as an experienced user, your control is limited to switching between the coils and toggling the airflow.

As a wax vaporizer, your options are to use it with the QCD/ quartz dual coil or the XTAL/ ceramic coil. The ceramic coil is perfect for the flavor purists out there, the hit is very clean, flavorful, and balanced. The trade-off is the short wait for the XTAL coil to heat up, but it is well worth the taste. The QDC coil heats faster and produces a thicker, heavier vapor- so if a certain level of “weight” is what you’re looking for in your hits, then this is the coil for that.

The intensity of your hits (especially when using the quartz coil) is lightly mellowed out through water filtration. The water bubbler on the flame isn’t as large as on the Linx Apollo (review), but it does hold just enough water to help rid the now cooler vapor of irritants and impurities. The mouthpiece on the bubbler is fairly narrow, so it’s a pretty far cry from using your average bong. When using a device with a wider mouthpiece, you’ll have to brace for some big clouds heading your way. This can be quite harsh even with the water, so this narrow design and the airflow control remedy that.

When you want to use the device as a Honey Straw, Yocan has made sure you have most of what you need, aside from the titanium rod- there is an included dab container, tool and a glass jar for dipping the rod into – all that’s missing is blowtorch. A Honey Straw technically still vaporizes concentrates, but it does so at much higher temperatures. If you don’t wait for the rod to cool a bit, you run the risk of burning your material. The vapor produced is also harsher, since it is hotter- so be thankful to that water bubbler again for mellowing that hit.

The Utillian 5 is another wax vaporizer that we’ve reviewed and it bears a slight similarity to the Flame since it also features two interchangeable coils and adjustable airflow. Both included coils on the Utillian have ceramic rods but differ in size- the Kanthal Coil is for smaller loads and prioritizes flavor over the amount of vapor, while the Triple Titanium Coil holds more extract, and produces more vapor with less flavor. So, these coils are quite parallel to the QDC and XTAL on the Flame.

Both the Flame and the 5 have simple one-button interfaces, and a few extra clicks on the 5 will allow you to adjust between 4 variable voltages 2.2V, 2.4V, 2.6V, and 2.8V. This variable voltage feature is interesting to see on a device with a smaller battery capacity at 1050 mAh- and this also means it’s something that could’ve been added to the Flame especially since it has a 1400mAH battery and charges with USB-C rather than the 5’s micro-USB.

The 5 is definitely a handier device, with the whole thing being just about the size of the Flame without the water bubbler- making it the winner in portability. The Flame needs water at every use so that limits where you can take it – but water filtration definitely has its perks. Performance-wise, the 5 is quite the lungbuster, and definitely would be easier on the user if it had a bubbler as well.

I would recommend the 5 to someone who prefers more control over their vaping experience and more intense vapor. This device has a single purpose- it’s a wax vaporizer- it’s handy and more discreet. At $69, it does what it’s meant to at a very reasonable price. If you do want to have water filtration on the 5, there’s an optional water bubbler available for $39, bringing the total to $108 or you could get the Linx Apollo at $260- which dual functions as an eNail you can use for any of your rigs (like these rigs from Higher Standards).

But I also think the Flame holds its own as a wax vaporizer, despite the single heat setting. It has a larger battery, which means you can use it for much longer and charge it quicker. For only $3 more than the 5’s base price, the Flame delivers great consistent flavor and employs the benefits of vaping with water. So far, it’s most affordable amongst vaporizers that have bubblers and there’s also the added feature of being able to use it as a concentrate straw.

In sum, the Yocan Flame is quite the device, it’s feature-heavy, with several attachments that change the experience. All the moving parts will seem daunting to a beginner at first, but it does set you on a path towards figuring out what you really want out of your vaping experience.

Water bubblers are always a good feature, but it does make it less likely to be the vape you travel around with. I’d recommend the Flame as a device you use for sessions at home. As for the Honey Straw/concentrate straw feature, it feels a lot more like a novelty than something that’s likely to be used often. Having to use a blowtorch and burning the material is just too troublesome. So, it might likely just be something that’s done a few times for fun- but it’s not a feature that’s really needed. It would’ve been more functional if it was an eNail attachment instead.

Yocan has always been the brand that spoiled its customers with options and great price points – and it achieves that with the Flame. The device delivers consistent power, fast charging, water filtration, a sturdy body, interchangeable coils, and the Honey Straw- at $72. It’s definitely not a bad deal and would be a worthwhile product to add to anyone’s vaporizer line-up. 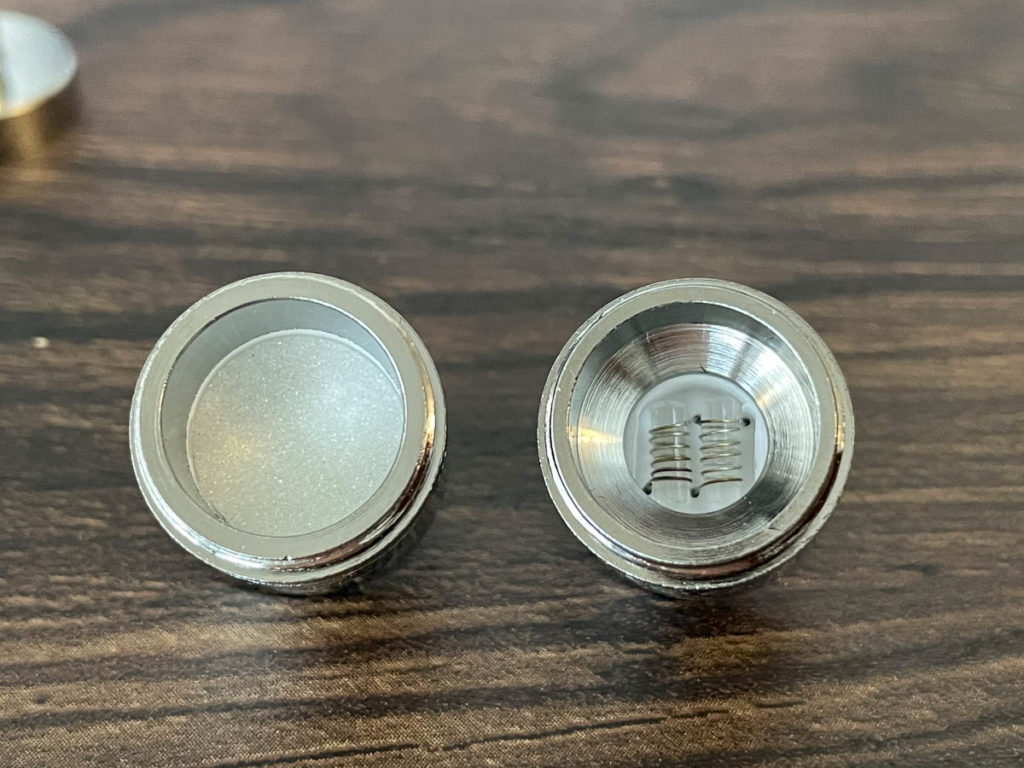