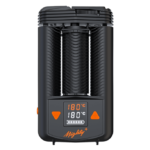 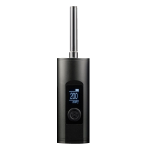 Design and development have reached a new high in the vaporizer market. There seems to be a new device released left and right, catering to whatever any user needs. Some devices are more complex than others, and some are as simple as straightforward as possible. Regardless of the many choices, the devices that stand out are the ones that strike the right balance in design, new technology, and overall performance.

No two devices (and brand) have been on top of our list of best dry herb vapes for as long as the  Mighty+ (review | buy) and its smaller counterpart, the Crafty+ (review | buy). The Mighty has been updated The Mighty+ (Plus) features a ceramic-lined filling chamber, fast USB-C charging, 60-second heat-up time, a new preset: the superbooster, and is the first-ever portable to be certified for medical use. Just like its predecessor, the Mighty+ retains its large LED screen, precise temperature control, swiveling mouthpiece, and of course – S&B Hybrid Heating.

The Arizer Solo 2 (review | buy) is another flagship product much like the Mighty+ is for S&B. It features several Arizer signature features such as high-quality borosilicate glass mouthpieces that cool down the vapor and make loading pretty easy. It also has a relatively wide temperature spectrum of 122-428°F, which can be controlled and viewed on the built-in OLED screen. The entire device body is made from sturdy brushed aluminum which adds to its overall premium feel.

Why’s it Worth Comparing?

Other than that both the Storz & Bickel Mighty+ and the Arizer Solo 2 are pretty well known for delivering what might just be the best vapor quality you can get from a dry herb vape. There’s not too much about these two that are similar. They’re also both on the larger side for a portable and feature excellent build quality. Both of them reaching excellent results by combining hybrid heating with different methods - the Cooling Unit in the case of the Mighty+ (Plus) and the long glass mouthpiece on the Solo 2. There’s also the big price difference - the Solo 2 delivers results even at less than half the cost of the Mighty+.

Like most flagship devices, both the Mighty + (Plus) and the Solo 2’s kits definitely come with a good number of pieces - all to make any session better and maintenance easier.

The Solo 2 comes with

The Mighty+ (Plus) kit has all your needs covered straight out of the box. Other than the unit and charging cable, it comes with the necessary cleaning tools and spares.

Here’s what the Mighty+ kit comes with:

S&B has made accessory shopping (visit store) pretty convenient by making several of its accessories compatible with its portables. All of these accessories are available to purchase individually or packaged as part of a kit. Notable kits are the

The Mighty+’s design can be easily summarized in two words; Rugged and Utilitarian. Most of its device body is covered in an ingenious finned design that keeps the entire device very cool to the touch. The Mighty +and its little brother, the Crafty +, are both made from a medical-grade, advanced biomaterial called PEEK.

The cooling unit and swiveling mouthpiece are at the top of the device, and this sits right above three (3) columns: two batteries on either side and the hybrid heating chamber in the center. The bottom half of the device houses the larger-than-usual LED screen and two orange (and very tactile) triangular temperature buttons. The Mighty+ isn’t one to fit in any pocket, but it might fit a small or medium-sized bag.

The Solo 2 measures 4.5 x 1.7 x 1in and weighs around 200grams. It sports a sleek, minimal columnar design that clearly places function over style.

The entire device body is constructed with aluminum and its finish definitely adds to its solid and sturdy feel. While it doesn’t exactly have a heat dissipation design like the Mighty+, it doesn’t get all that warm even after successive sessions.

With measurements like that, it’s clear that the Solo 2 is a big one. Like the Mighty+ (Plus) it won’t fit in your pocket, but it fits just fine in a purse or a backpack. So it’s better suited to at-home vaping as opposed to taking it out on a hike or any other outdoor activity. Its signature glass mouthpiece definitely dampens its portability.

If you want a device with long battery life, definitely consider these two.  At 4600mAH, the Mighty+ is good for 2 hours and a half and charges in only a couple of hours via USB-C. While that’s definitely good, the Solo 2 beats the Mighty’s battery by half an hour, capable of going for up to three hours without a recharge.

However, when the Solo 2 runs out of juice, you’ll have to charge it via the included proprietary charger. The Solo 2 does feature pass-through charging, meaning you can continue to use the device while it’s plugged in.

Both devices have the best battery lives on a portable vape and will most likely last a whole day’s worth of intermittent sessions. No doubt about it- USB-C is easier to find than a proprietary charger, but as far as battery life is concerned- the Solo 2 wins.

Both the Mighty+ and the Solo 2 have very noticeable LED Displays and tactile analog controls. On the Mighty+, the LED Display sits alongside its two arrow buttons and its size definitely makes it easy to see everything that’s going on with the device, from the battery level to the current heating temperature. The only other button is the power button on the side for turning the Mighy+ on/off and to activate super-boost mode.

Above the circular menu pad on the Solo 2 is the OLED screen, it’s pretty bright and displays the usual information such as device temperature and battery levels. It’s not as eye-catching as the Mighty+’s but it does the job. All the device controls are on the menu pad and the pad is surprisingly responsive and well-sized, meaning you won’t find yourself accidentally pressing the wrong end of it or fumbling for controls.

Equally as popular as the Mighty+ is its smaller counterpart; the Crafty+. The Crafty+, priced at $280 - is closer in price to the Solo 2 at $165 - but still significantly more expensive. The Crafty+ features S&B signature features such as hybrid heating and the cooling unit - and its 2800mAh battery charges via USB-C. It’s definitely more portable than both the Mighty+ and the Solo 2 and will fit anywhere and is concealable in your hand.

The Crafty+ (plus) boasts a quick 1-minute heat-up time, 3 in-device pre-set temperatures, and the same PEEK exterior. However, it does lack an onboard display and requires you to connect to the smartphone app for full control over the device. It’s the more portable option, but it’s definitely not as straightforward to use nor as powerful as the Arizer Solo 2 or Mighty+.

One of the most interesting features of the Mighty+ is the Cooling Unit. A product of great engineering, the cooling unit is essentially a lengthy vapor path within a small space. Hot air travels up from the chamber and is directed through the maze-like path in the unit before it goes through the mouthpiece – resulting in perfectly cooled, excellent tasting vapor.

The Power of Glass

It’s hard to talk about the Solo 2 without talking about its signature heat-resistant borosilicate glass mouthpieces. It’s one of the Solo’s most notable features, cooling down the vapor before it reaches the user’s mouth and the neutral material of the glass also helps to keep the vapor’s flavor pure and untainted by any foreign materials. In fact, glass mouthpieces are probably one of the best features you’ll find on any vaporizer

The only downside is that the standard straight 10mm mouthpiece sometimes results in a somewhat restrictive, milkshake-like draw especially when packed too tightly. For best results, I recommend using the bent mouthpiece and a slightly loose pack.

There’s a reason why S&B’s vapor is the standard of the industry - especially since they actually invented hybrid heating, and it’s now adopted onto several newer devices just like the Solo 2. Hybrid heating is the combination of both conduction/ convection to get the most out of your ground material and produce the best results.

The Mighty+ has a temperature range of 104°F - 410°F and heats up in 45 seconds (on average). The first hit on the Mighty is very flavorful with lighter vapor and gets denser throughout the session. Each session on the Mighty is satisfying and simply perfect.

The Solo 2 heats up in about 30-60 seconds, depending on your desired temperatures (ranging from 122-428°F).  The Solo 2 produces dense visible vapor, which is dense at higher temperatures and lighter at lower temps. Thanks to the long glass mouthpiece, it’s always perfectly cooled by the time it reaches your lips.

Both devices are cult favorites that produce excellent vapor.  Large portable options with long battery lives, simple controls, and are easy use, clean, and maintain. The Mighty is a premium with a premium price tag of $399, while the Solo 2 is much much cheaper at $165. The Solo’s hybrid heating + glass mouthpieces make it such an excellent buy for its price. So, if you’ve set your budget t in that range, then the Arizer Solo 2 might just be the one for you.

If you’re looking for S&B quality vapor but at a slightly lower price of $280 - then the Mighty’s little brother, the Crafty+ (review | buy)  is definitely worth checking out.