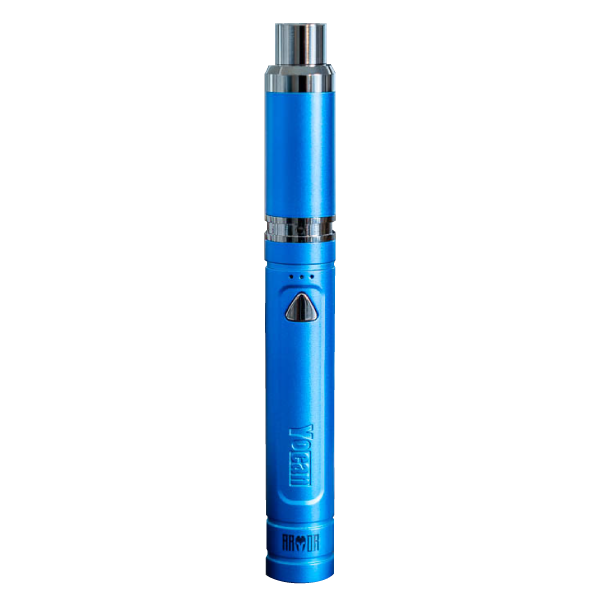 Yocan Vane has a 380 mAh battery with Dual Quartz Coil and features a pre-heat function. It's a sleek and straightforward vape that produces vapor that's suitable for beginners. It may be an appealing choice, especially for those who have a low budget or as a ‘travel vape’. But, if you are looking for a primary wax pen, I suggest you invest a little more $ and go for a longer-lasting, better quality vape.

Yocan (visit here) has been releasing new beginner-friendly vaporizers this year. The Yocan Vane (Review), a dry herb vape, and the Yocan X (Review), which is a pod concentrate vape. They both perform good for their price, and just recently, they released a new vape pen called the Yocan Armor.

Yocan Armor is thicker than most vape pens around It’s an easy-to-use vape pen that produces entry-level quality vapor. It also has a pre-heat function that some vapers may find useful.

The Yocan Armor is a simple and straightforward vape pen that has a single button interface. As the name suggested, it’s slightly thicker than most of the vape pens since it has ‘armor’ around it to handle impacts in case you accidentally drop it. When I hold it, it feels solid and smooth. I can conceal it with my hand and put it in a pocket/purse.

The Yocan Armor is 510 threaded. It means that it can fit and work with any 510 carts if you want to vape oils or any 510 threaded atomizers if you’re looking for a replacement. It has three major parts:

Yocan Armor is an easy-to-use device since it has a single button to turn on/off the device and cycle through the temperature presets. to use it you need to:

Voltage Settings: The voltage settings are indicated by the led lights just above the power button which are: 3.0V | 3.5V | 4.0V

Pre-Heat Function: You can pre-heat your wax for 10 seconds by pressing the power button 2 times.

The Yocan Armor has a small coil which is enough for vapers who are just starting to vape extracts. It heats up quickly, at about 10 seconds, you can start your session. However, as I’ve mentioned earlier, some extracts aren’t vaped properly and make it even harder to clean than most vape pens.

The unit and the mouthpiece get a little hot which is not surprising to me. This is something you will expect for a small device because there’s no way for the air to disperse properly. To prevent it from happening, I use it on the lowest voltage settings which produce vapor with a milder and more flavorful vapor.

What could have been better: There’s an extra coil included in the box which vapers may find useful especially if the primary coil needs cleaning and they’re not in the right place to do that. However, I wished it was a ceramic coil rather than the Dual Quartz Coil so that beginners may be able to experience a vapor with more flavor and fewer clouds.

The vapor it produces is something that you would expect from a $30 vape pen. You get big clouds whatever voltage settings you choose and the flavor is still there. Don’t get me wrong, the vapor quality is good for its price range but it can’t match those premium vape pens like Puffco Plus (Review) or Dr Dabber Stella (Review) that produce vapor with utmost flavor and potency.

Overall, the Armor is an inexpensive vape pen that gets the job done. It’s simple, portable, and the quality is good for its price. The vapor is not the best but pretty decent for first-time vapers. However, I’ve been testing Yocan vaporizers for a while, and the Armor isn’t the Yocan’s most quality vape in their product line—it’s average at best.

There are better options out there such as the Utillian 2 (Review) which is a bit pricier but beats the Armor in terms of vapor quality and battery life. If you’re looking for a vape pen with insane vapor production, the Utillian 5 (Review) is worth checking.