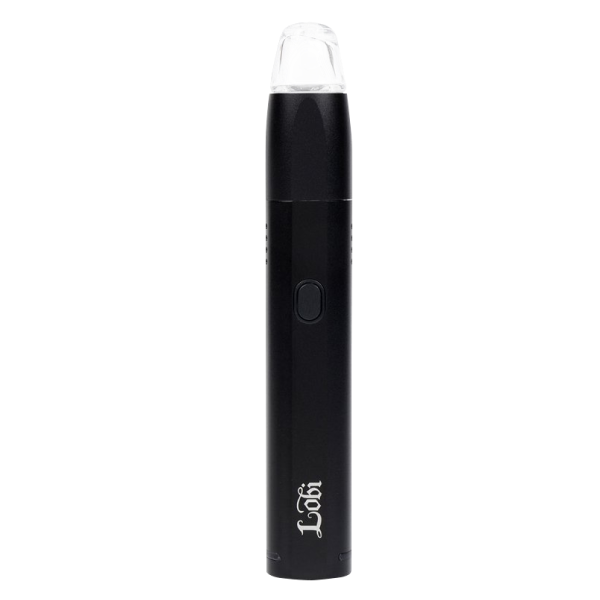 4.5 4.5/5
The Kind Pen Lobi is an uncomplicated, and well-performing wax pen. It features a full quartz coil-less atomizer, 4 pre-set temperature settings, a glass mouthpiece, an LED indicator, adjustable airflow, and a 1200mAh battery that charges via USB-C. It's isolated airpath is completely splash-proof, so you’ll never have to worry about any spit back coming from the hot atomizer

Kind Pen (visit homepage) is a New Jersey-based brand, committed to making devices that take all users far beyond the days of the old torch and nail. This year, they’ve released a collection of 3 devices; uniquely designed dry herb vaporizer OG Jams (review | buy) and  The Don (review | buy) – which is an all-in-one portable dab rig with a self-contained water filtration tube.

Since wax pens are pretty much one of the most straightforward devices in vaping, most device kits are relatively lean – coming with the basics spares, cleaning tools, and a charging cable.

The Lobi comes with the usual inclusions, and then some – you also get a spare quartz atomizer and a free water bubbler which attaches directly onto the mouthpiece.

The Lobi strays from the standard vape pen design by having a flat front, and rounded sides – overall it’s a geometric design that tapers toward the glass mouthpiece on top. The main body has a stainless steel exterior which comes in either matte black or a whole bevy of colors and gradients. It’s kind of hefty but also sturdy and feels substantial to hold. and is a bit bigger than most wax pens around. But still, it’s portable enough to carry around and put into your pocket.

Main Device Body: On the front of the device is the single power/firing button and the logo just above the base. The LED Strip wraps around the device and indicates the current device status and the temperature you’re on.

Temperature/ Color Guide: Most devices with pre-set temperatures indicate the current temp with a specific LED color, however, the colors vary depending on the manufacturer. This kind of makes it cumbersome having to remember which is which. So, Kind Pen included a guide for which color corresponds to which temperature at the base of the Lobi. This is an incredibly thoughtful design detail that should definitely be added to other devices.

The tapered mouthpiece is made of glass yet somewhat feels like it’s made of a sturdier hard plastic. As mentioned earlier, it is tapered with a flat angular side and a small opening to let vapor through.

Glass pieces and mouthpieces especially are some of the best features you’ll find on any vaporizer. Since glass is a neutral material that helps to keep the flavor pure so it’s untainted by any foreign substances. Ensuring that you get to taste every single flavor profile and nuance in your material.

The Lobi is powered by a 1200mAh battery which is definitely pretty sizable since most wax pens average anywhere from 850mAh to 1000mAh. The Lobi will definitely last you well over a full day’s use and then some.

If you do run out of juice, the Lobi is easily rechargeable via USB-C. It’s great to see more and more devices finally installing USB-C ports in their devices especially since it’s far more stable than the outdated Micro-USB.

The Lobi has full quartz, coil-less atomizer, and an isolated airpath that’s completely splash-proof, so you’ll never have to worry about any spit back coming from the hot atomizer. Since the atomizer is coil-less, expect the vapor on the Lobi to be significantly lighter than if you were using a device with exposed rods.

Vapor Quality: The quartz atomizer is definitely geared towards getting the most flavor out of your material as possible – and it does just that. The resulting vapor on the Lobi is terpene-rich, smooth, and well-balanced.

The Lobi has 4 pre-set temperatures at 450F, 500F, 550F, and 600F.I found that I got the best results anywhere on the two middle settings – with the airflow wide open. Since the mouthpiece has a relatively small opening, it can feel a little “milkshake” like with the airflow valve closed. So I definitely recommend that you keep it open whenever you’re using the Lobi.

The Lobi is definitely uncomplicated. Using it is as straightforward as using any other wax pen – but it does up the ante by being thoughtfully designed and superbly functional.

It makes good on its promise of delivering quality vapor on the go and for even better, cooler results – attach the included water bubbler onto the mouthpiece. Being able to add water filtration to any wax pen is a definite plus. Since other than just cooling vapor, water also rids vapor of any possible impurities