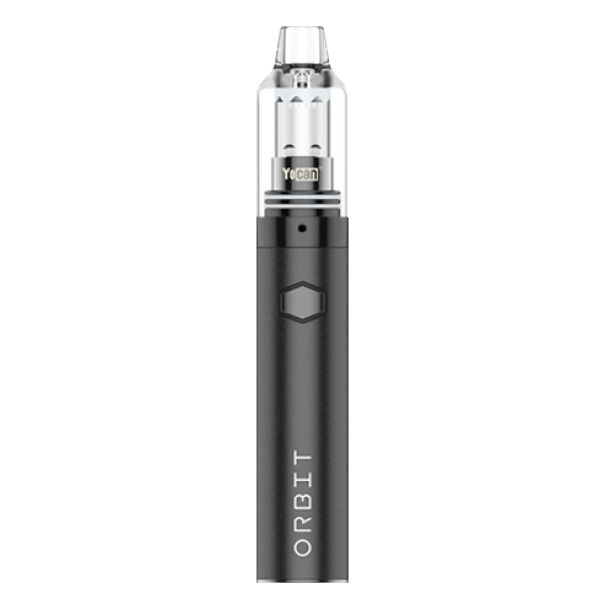 4.5 4.5/5
The Yocan Orbit is a back-to-basics wax pen with a unique see-through coil-less oven, and the option to use the accompanying terp pearls to better vaporize wax. It also features a stainless-steel body, 3 pre-set settings, a 1700 mAh battery, and USB-C charging.

Yocan’s strength as a brand lies in numbers and its price point. they’re never in short supply of new products and are constantly updating their older models – all while staying within the low to mid-range price range. They’re the makers of concentrate vaporizers like Regen (review), Explore (review), and the Armor (review) vape pen, and the Yocan Hit (review) dry herb vaporizer.

Now, their latest release; the Yocan Orbit (buy) is priced at $60.00 and is a sleekly designed wax pen with a see-through quartz bowl and mouthpiece, with quartz balls that spin as you draw. It also features a stainless-steel body, 3 pre-set settings, a 1700 mAh battery, and USB-C charging.

Kit with Tools and Spares

Yocan devices always come in the same padded, hefty box – and the Orbit is no different. What’s unusual (but a good thing) is that the Orbit actually comes with more tools and spares than usual. There are 10 quartz balls (on top of the 2 that come inside the device), 2 pick tools, and more.

The Yocan Orbit’s main body is constructed out of stainless steel and comes in a shiny finish. The Yocan Orbit’s shape doesn’t stray far from the usual wax pen design. It’s a thick pen-style device with all its main components up top; the mouthpiece, bowl, and button. While the battery takes up the entire bottom half.

What gives the Orbit its visual appeal is the well-shaped glass mouthpiece and quartz bowl. You can actually see the bowl heat up, your wax melt, and the terp pearls spinning as you draw.

The Yocan Orbit has a simple single-button operation. 5 clicks to turn the device and pre-heating on, 2 to cycle through the 3 voltages, and 5 clicks to turn it off. This is the same interface on nearly all of Yocan’s wax pens – intuitive and straightforward.

Around the firing button is a LED ring that indicates the current device status and which of the 3 variable voltages you’re on.

A glass mouthpiece is probably one of the best features you’ll find on a vaporizer- regardless of whether it’s a dry herb vaporizer or a concentrate device. Glass is a neutral material that keeps vapor pure a
nd untainted by foreign materials – delivering full, flavorful results.

On the Regen, the mouthpiece is somewhat bell-shaped, covers the deep quartz bowl, and is fixed in place by two rubber seal rings. The tapered end of the mouthpiece is comfortable and I’ve found that it does a great job of staying relatively cool- even after successive sessions.

The Yocan Orbit is powered by a 1700mAh battery which should last most average users the entire day or 10-12 sessions. Just in case you do need more juice, the battery is pretty easy to swap out for a new one.

It also charges in-device, in 60 minutes via USB-C. It’s pretty cool to see all the new releases adapting to the times and using USB-C. The former micro-USB was pretty slow, and would’ve probably charged this device in double the time.

Terp Balls aren’t a really new thing – but finding them already in a wax vaporizer is. They’re small glass balls that spin within the heating element and absorb the same heat. The hot spinning balls then agitate the dab and help it heat evenly and more effectively. At first, I definitely thought the balls were a gimmick, but they definitely do help wax vaporize better. It’s also quite cool to be able to see them spin within the device.

A word of caution, however, the mouthpiece seal rings do a pretty good job of keeping the mouthpiece in place and require a bit of force to remove. If you simply pull the mouthpiece up, the terp balls will come flying out. So it’s best to slowly twist the mouthpiece off of the device. This is probably the reason why the kit comes with so many spares.

The coil-less design on the device is so that the quartz terpene balls could spin within it and evenly spread material throughout the coil. Quartz has always been known for delivering dense, heavy-hitting vapor – and it does just that on the Orbit. Although, on the lowest setting the vapor was definitely more flavorful and just dense enough. In the middle setting, it was a lot less flavorful and had a slightly burnt taste. So you can definitely imagine what the highest setting is like.

The Orbit doesn’t have a temperature-regulating chip like the Micro+ (review) or other pens, so it remains hot for as long as you’re pressing the button – making it prone to over-heating. All this said the best (and safest) setting on the Orbit is definitely the lowest one.

The Yocan Orbit takes us back to the basics of wax pens and is definitely a no-fuss, no-frills device. It’s simple enough to use but is better without the pearls within the heating element. The pearls tend to become sticky after some time and are just another thing to clean and keep track of.

So our pro-tip? Take out the pearls and just visually check if your material has been consumed or not.  It’s not too often that we see how the wax vaporizes within the device – and on the Orbit, it’s as clear as day. If you’re still on the market and want to check out more devices, definitely check out our list of the best wax pens of 2022. 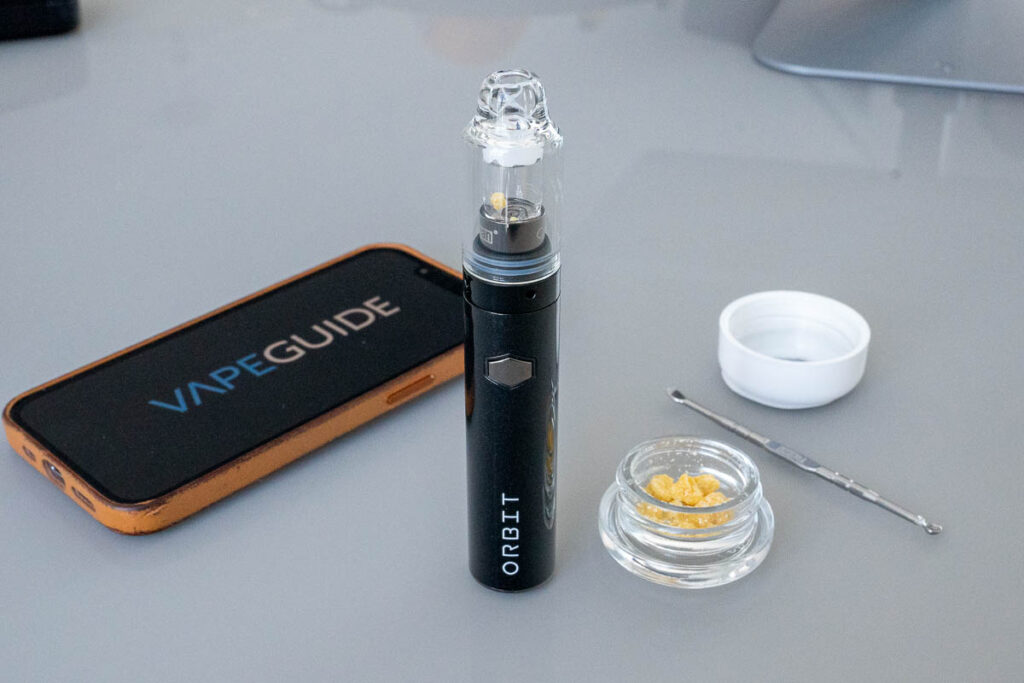 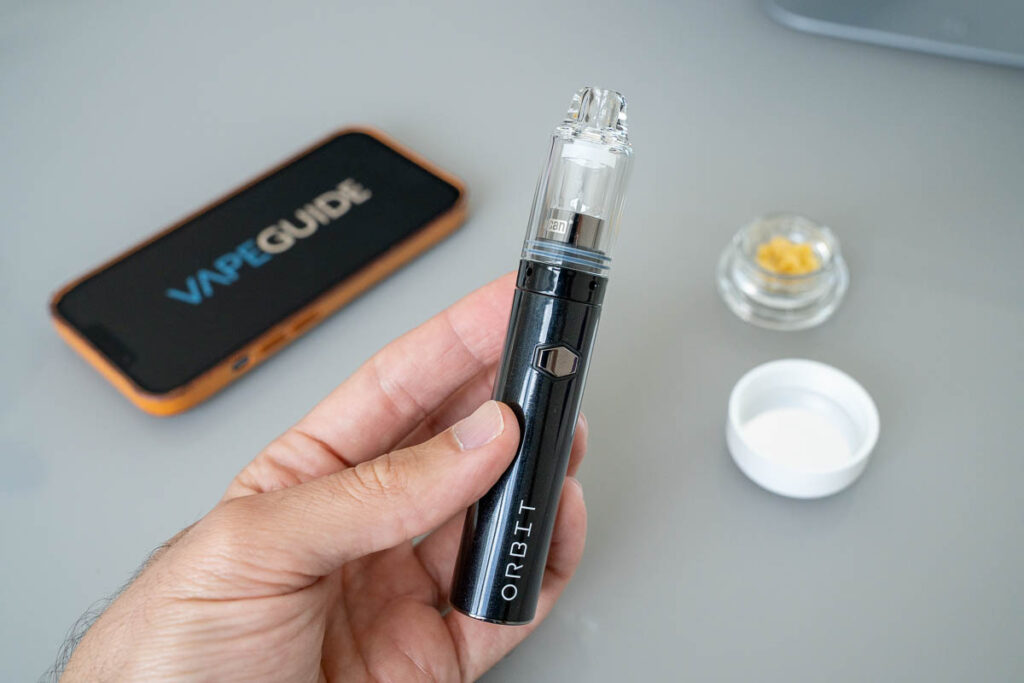 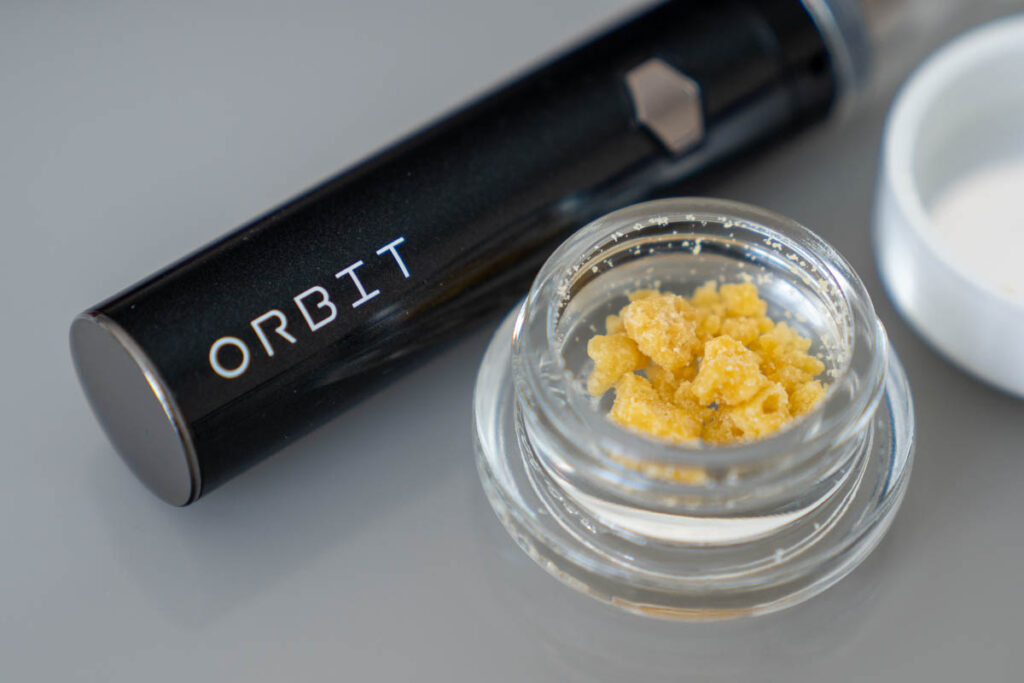 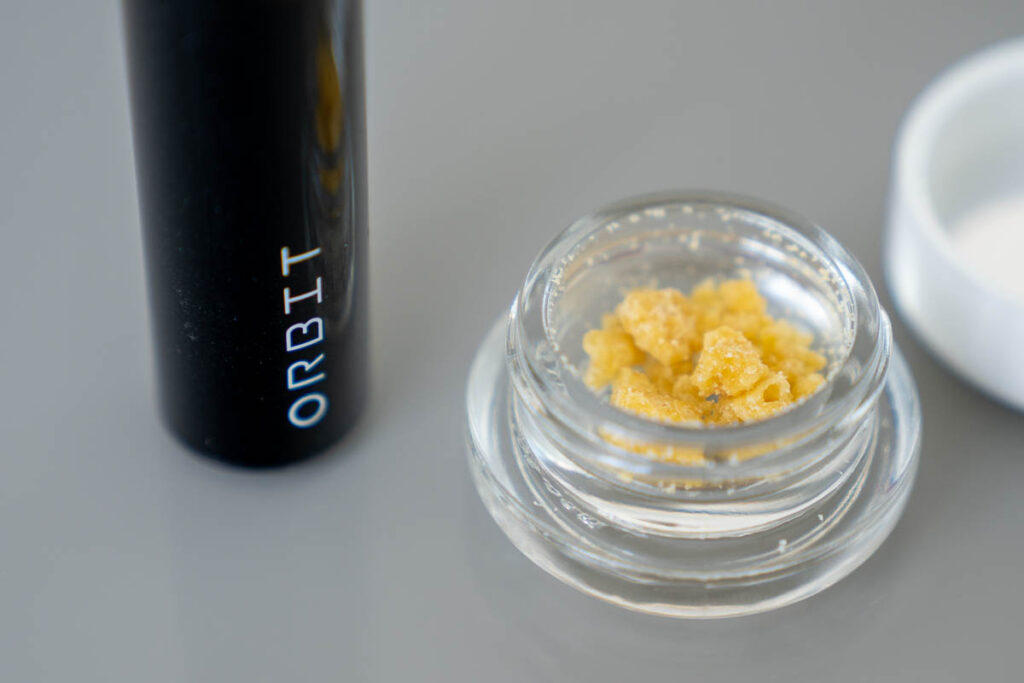 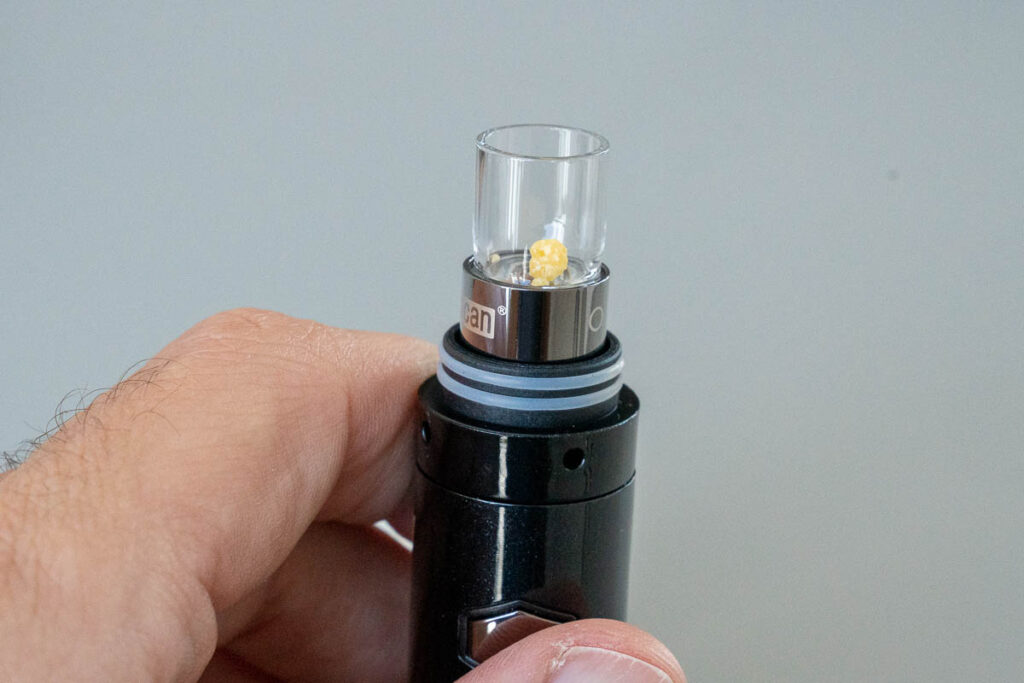 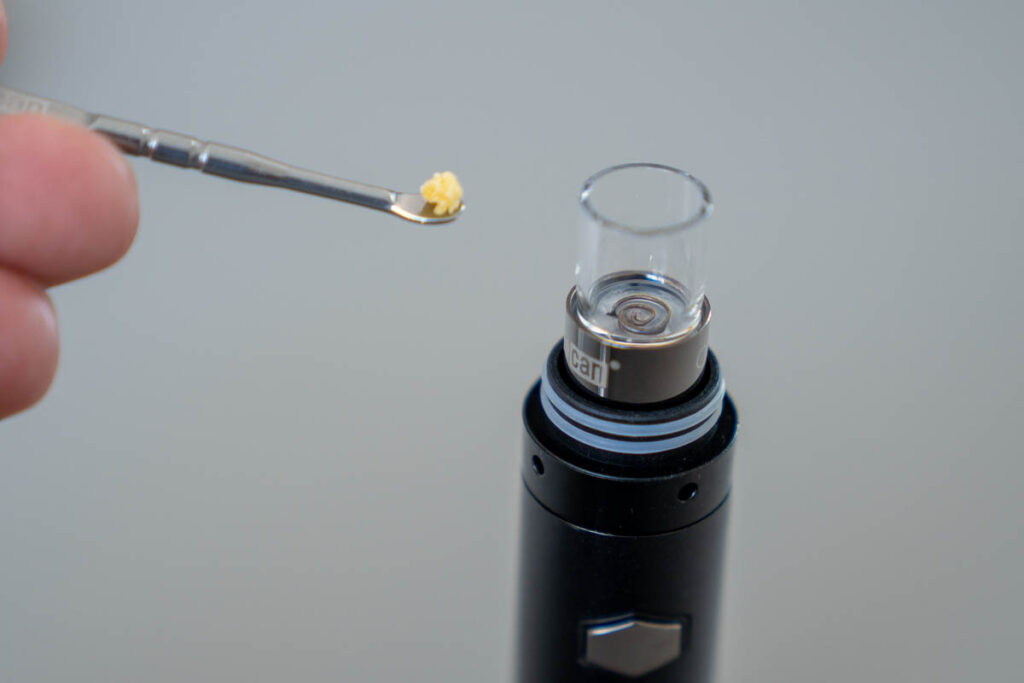 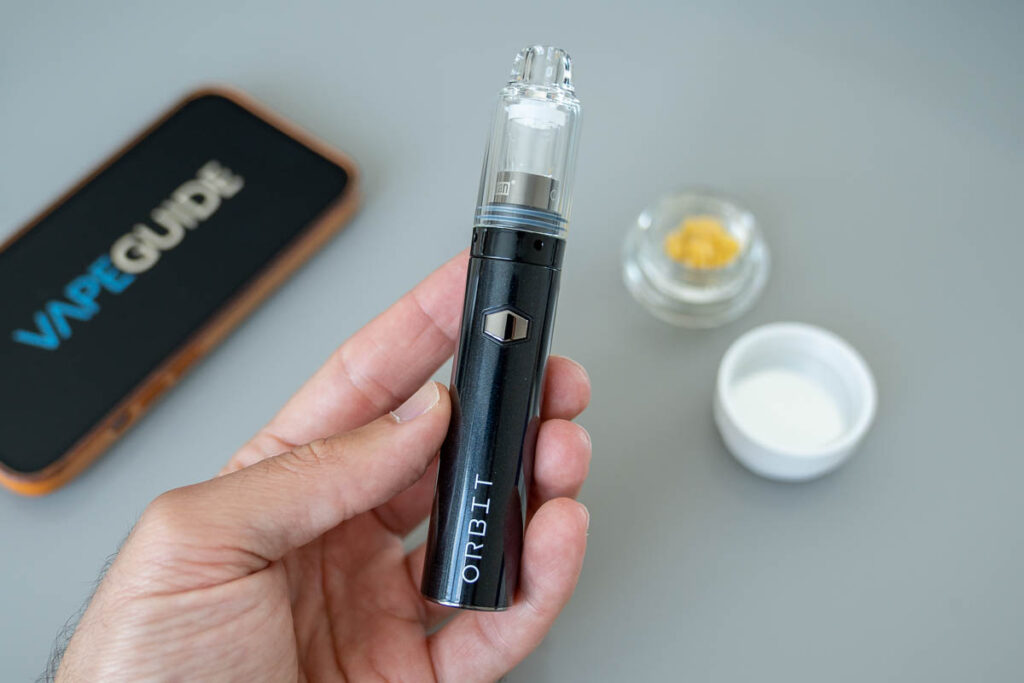 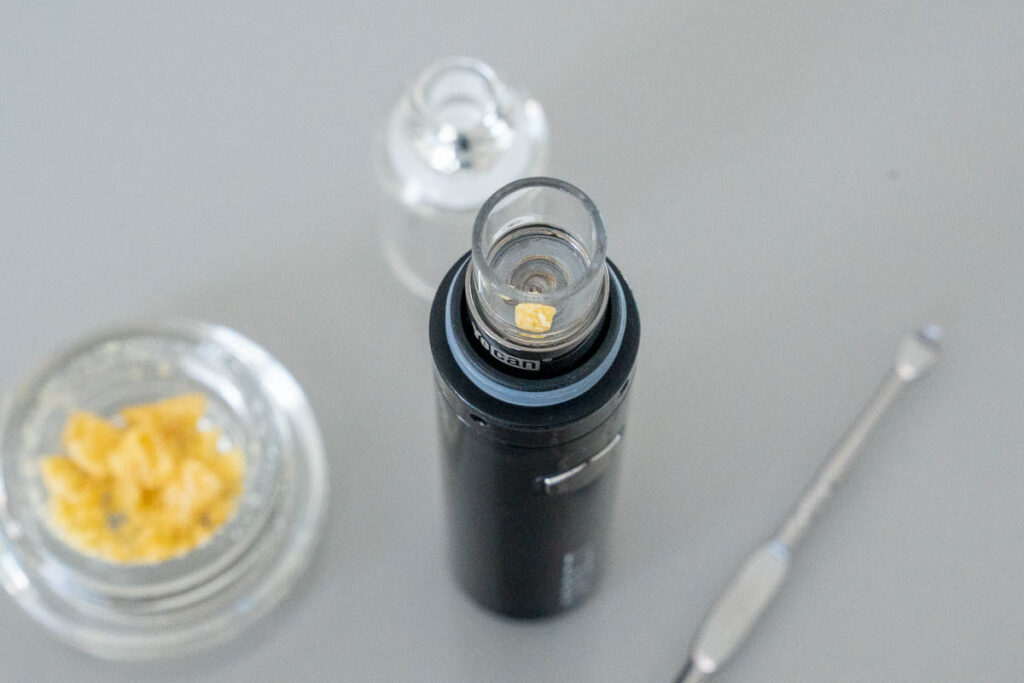 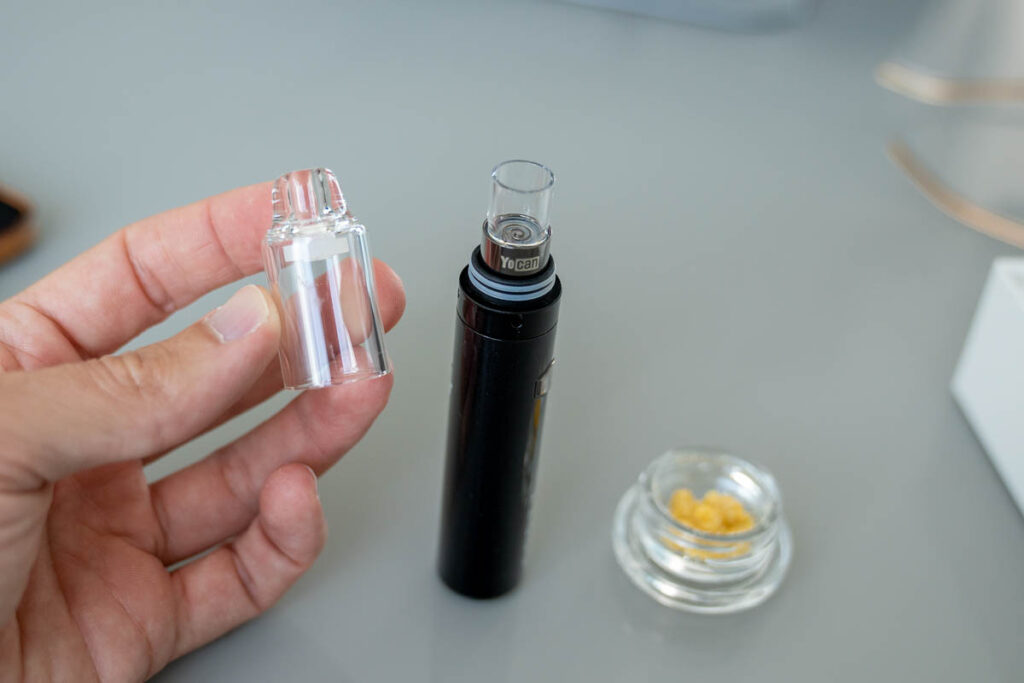 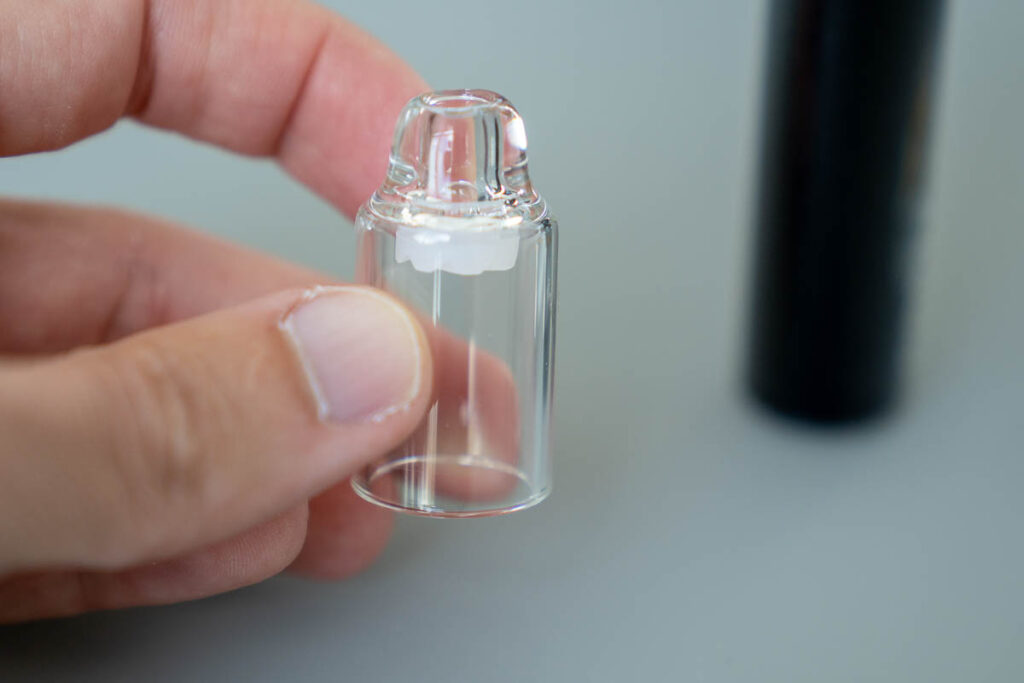 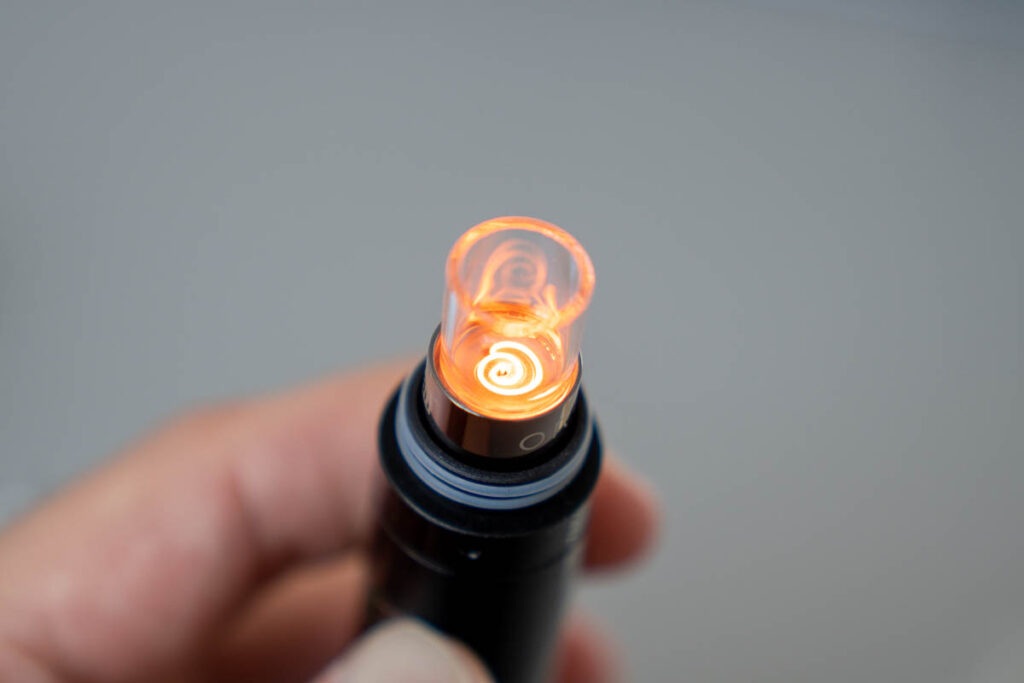 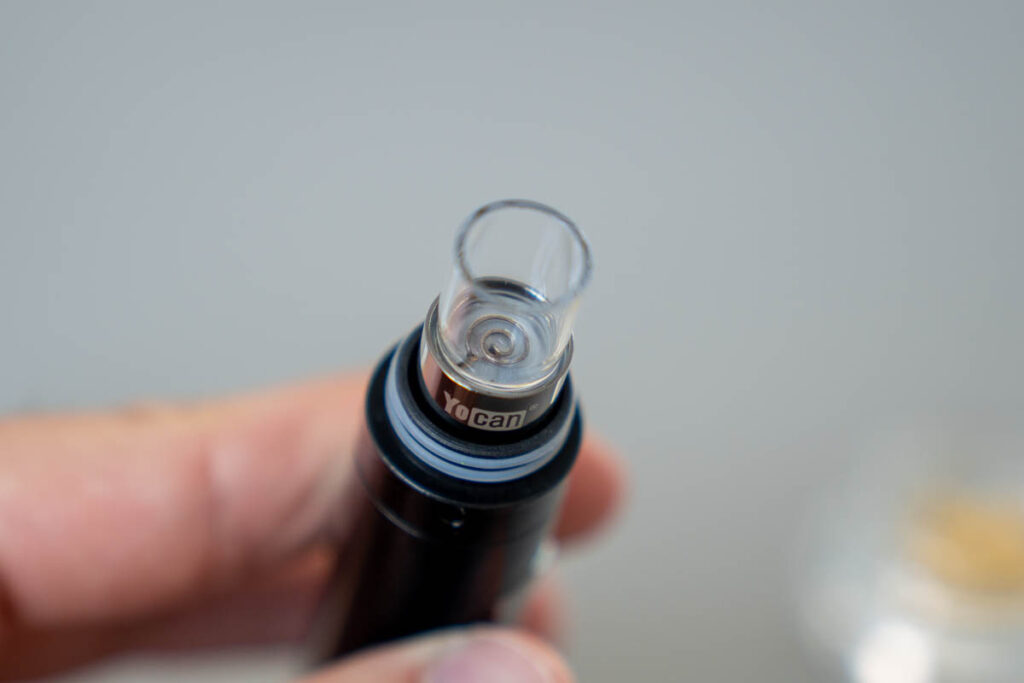 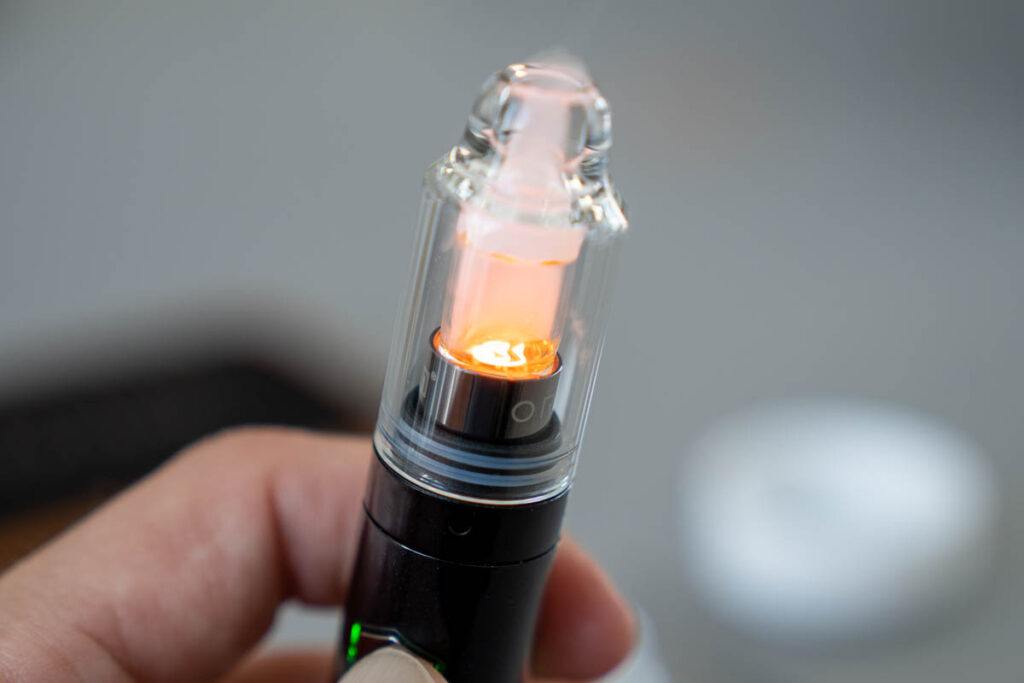 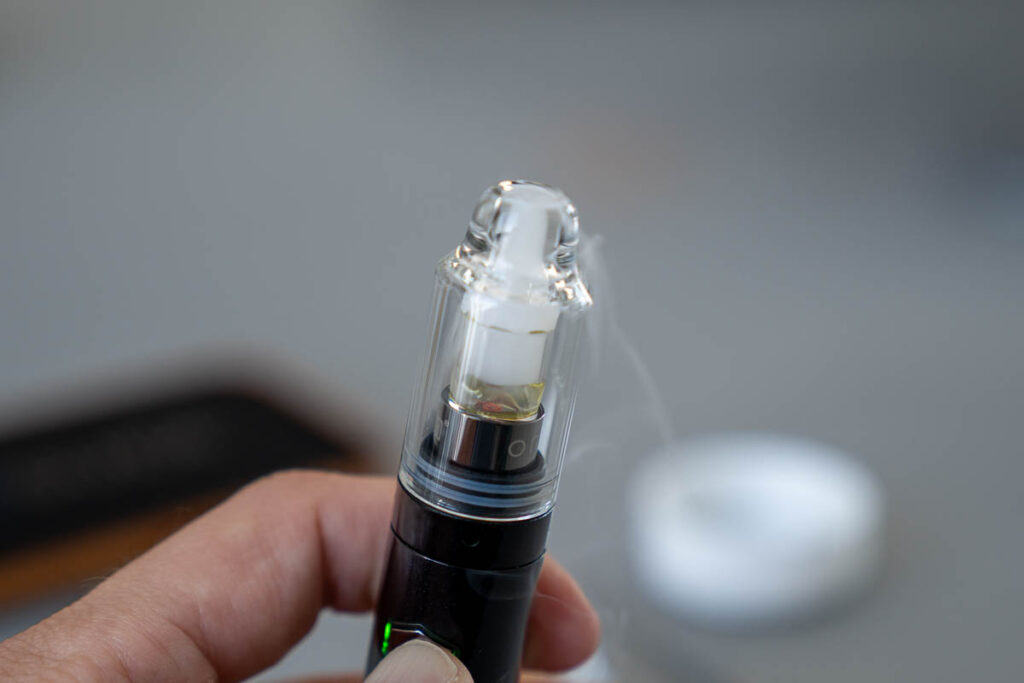 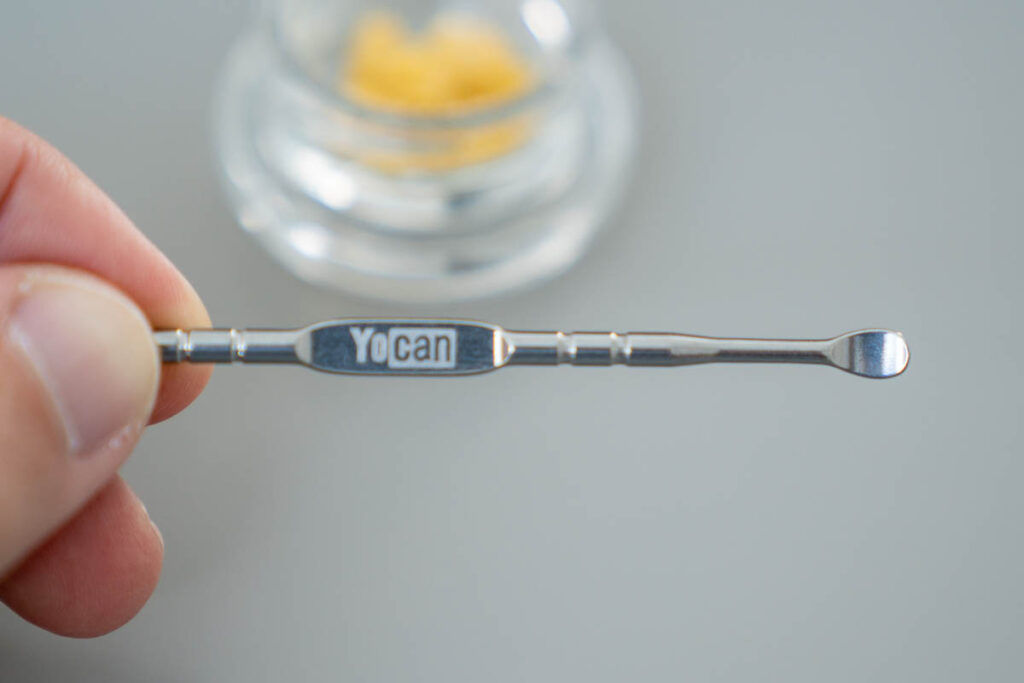 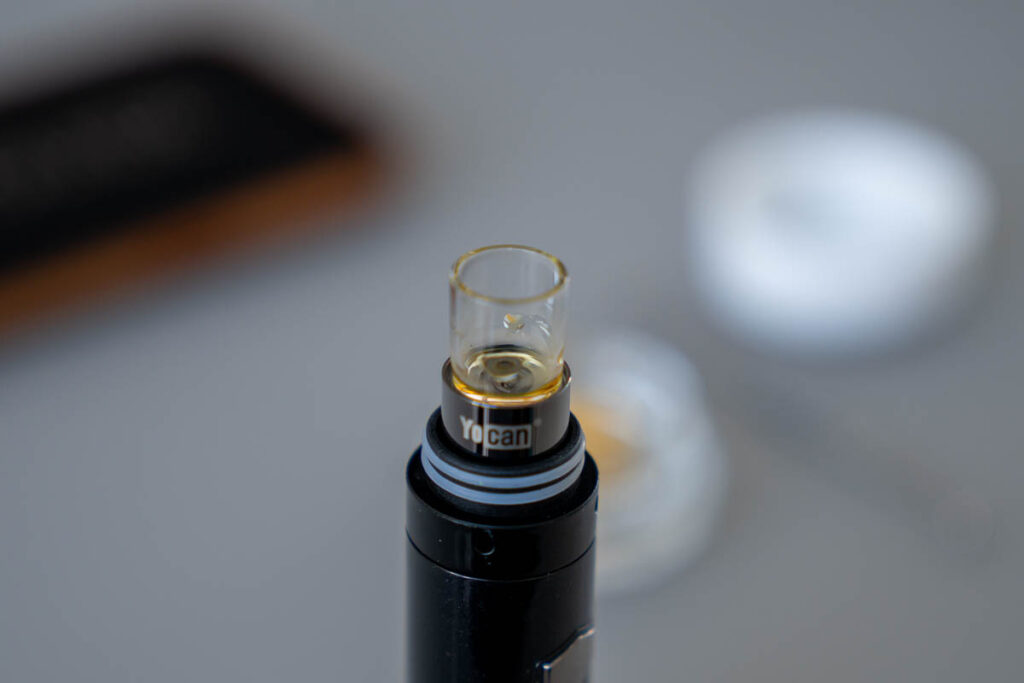