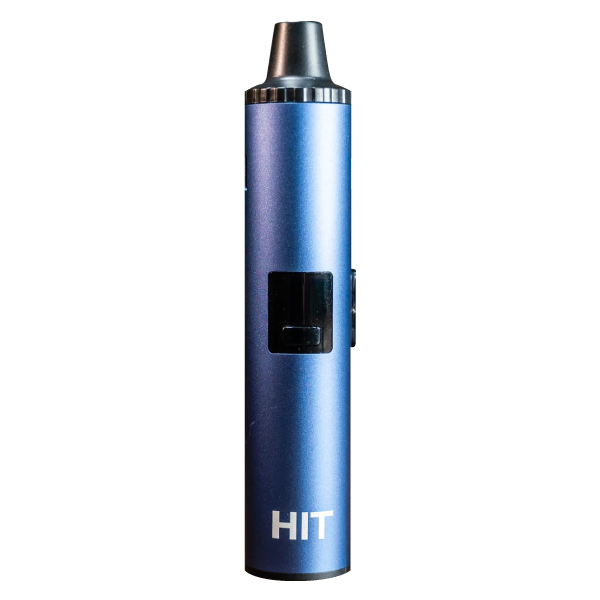 The Yocan Hit is a pen-like dry herb vaporizer that has cool innovations for its price. It has a built-in stirring tool, precise temperature control, and convection heating which are uncommon to find for an affordable vaporizer. It has a small and sleek build that allows for stealthy and discreet vaping. Although the Hit may be appealing for beginners, it's not recommended for experienced vapers who are looking for top flavor or power.

Yocan (visit here) is a manufacturer from Shenzhen, China that provides quality and innovation in their vaporizers. They are known for making concentrate vaporizers like Regen (Review) and Explore (Review), and the Hit is an unusual release for them as it is a dry herb vaporizer aimed at beginners.

The Hit is an inexpensive vaporizer with a pen-like design and precise temperature control. It has a powerful 1400 mAh battery and has a convection heating method that out-performs some of the comparable vaporizers within its price range.

Most weed vapes are box-shaped but the Hit has a slimmer body that is more compact and less bulky. It’s made out of aluminum and has a metallic blue coating that leaves a nice glossy finish in it. At four inches tall with a cylindrical-shaped body, it’s portable and perfect for discreet vaping.

There’s a big OLED screen located in the middle of the device which gives all necessary information such as temperature and battery level. On the side of the device, the airways are located and beneath it is the temperature dial. The Hit is a simple and straightforward device but it also has some nice features:

The Hit features a mouthpiece with a built-in stirring tool which some vapers might find useful. You can stir the herb in-between sessions to make sure the herbs are evenly burned to deliver more potent vapor. However, the Hit is a convection-type vaporizer, you won’t be using it as much as you would on other types of vapes—still, it’s a pretty nice additional feature.

The mouthpiece is magnetically connected to the battery which you can easily remove to load or stir the herbs. It has the same flaw as other small vaporizers- the heat has nowhere to dissipate and stays locked in the unit. This makes it hot to hold and the vapor might become harsh on the higher temp settings.

The Hit uses a convection heating method and has a ceramic oven that allows the herbs to be vaporized without being “burned.” It has air-intake holes and a screen at the bottom of the oven that’s easy to clean, fill, or even empty. Also, it has a smooth surface on top and you can easily put herbs into the oven.

The hit is a straightforward device- it has a power button in the middle and temp dials on the side. You can precisely set your temperature in single-degree increments from 200°F to 480°F.

Cleaning & Maintenance: Since the Hit is a convection vaporizer, cleaning it is very easy. You just need to empty out the chamber after a session and then use the cleaning brush to get rid of any residue that is left over.

Yocan did a good job of making the Hit a functional vaporizer for beginners. The airflow is great- you can inhale the vapor whichever draw technique you want. Also, after every session, the herbs were brown and crispy which is a clear sign that the herbs are thoroughly vaped.

However, there’s a flaw on this device—its size. Since it’s small, the Hit gets warmer after being on for a while. It has a maximum temperature of 480°F that’s high enough for the herbs (or even the device) to combust so I suggest you don’t go beyond 420°F to prevent it from happening.

The vapor produced by the Hit is quite tasty and much better than you would expect for a vape that costs under $100. You can probably guess that the convection heating and the integrated stir tool have a lot to do with that. With the ability to stir the herb while you’re vaping, you can maximize the flavor during each session by making sure that every single piece of herb gets fully vaped.

The Hit is packed with a 1400 mAh battery that can last for about a few hours of moderate vaping. It’s quite big for a vaporizer within its price range such as AirVape Xs Go (Review) and G-Pen Dash (Review). This may be the one area where you’ll see the inexpensive nature of this device since more expensive weed vaporizers tend to have larger batteries. At least, it uses a USB-C charger instead of Micro USB so recharge times are pretty quick.

For an inexpensive vaporizer, it does stand out in a crowded market, however, If I were to compare the Hit to mid-tier dry herb vaporizers like Utillian 620 (Review) or K-Vape Pro (Review), it won’t stand a chance. Yes, it performs well, easy-to-use, and portable but if you’re an experienced vaper and looking for a replacement for your worn-out vaporizer, I suggest you go buy something higher. Nevertheless, this vaporizer is good for beginners who like the idea of having a pen-like dry herb vaporizer.