4.7 4.7/5
The Boost EVO is another release from the famed brand: Dr. Dabber. It also features the brand’s signature ergonomic deep center curve and LED lights. All of the EVO’s components are magnetically secured, making cleaning and assembly a breeze. One of its most notable performance features is the integrated temperature sensor that ensures that the atomizer does not overheat. The EVO is a simple, yet well-performing dab rig, and it might just be a new crowd favorite from Dr. Dabber.

The original Boost by Dr. Dabber (Visit Website) was released in 2015 and followed by the Dr. Dabber Switch (Review), which is one of the top-eRigs right now. The Boost EVO is a type of extract vapes that is quite similar to the traditional rigs but doesn’t require a torch to heat up.

As you can see, the Boost EVO doesn’t retain the thin, tall, and circular-shaped design that we’re used to, but it evolves into a more refined and futuristic-looking eRig. The base is designed to be stable and fit comfortably with your hand, and it has LED rings on the side for cosmetics. There’s a magnetic adapter that connects the base and glass attachments for easy and quick loading.

Another notable feature is it has a built-in temperature sensor embedded in the quartz dish, making it possible to maintain the exact temperature while heating. The Boost EVO is available in two color variants: Moon White & Eclipse Black, which retails from Dr. Dabber (Visit Store) for $330. Our coupon code (TVG15) will save you 15% and bring the cost to around $280.

Dr. Dabber Boost EVO is compatible with THC/CBD Wax, shatter, honey, and other types of solid extracts. In this review, I’ve used the CBD dab from Steve’s Goods and from In-Hemp, which is available to ship anywhere in the US.

I was surprised when receiving the review unit since the EVO comes with a durable protective case made from automotive-grade impact material. It’s lightweight and sturdy in a way that will give you peace of mind whenever you take it with you.

The kit has a sliding lock to the case to keep it securely closed and has a hidden storage compartment that holds accessories such as the charging cord and dabbing tool. The kit includes the following:

The Boost EVO doesn’t differ much from standard portable rigs, though it has a convenient and straightforward design. It has an hourglass-shaped body with ergonomic pads on its side, ensuring a comfortable and stable grip while holding the device. On top of that, the ergonomic pads were outlined by customizable RGB rings.

The EVO stands at about 8″ tall and relatively thicker than the previous model. It comprises three main components (Battery, Coil, and Water Bubbler) that snap quickly, making setup and disassembly at ease.

The Battery of the EVO lasts up to 50-60 good hits before charging it again, which equates to 2-3 days of casual use. It has a single-button interface responsible for toggling six preset temperatures (ranging from 550-750°F) and changing the lighting profile.

Under the button, four LED lights indicate the battery level. The base’s rear has a silicone flap, which can be easily opened to expose the USB-C charging port. Also, the battery supports pass-through charging, so you can use it while juicing up.

The coil is located on top of the base, and it serves more like a ‘dish’ than a standard coil. It snaps easily through a magnetic connection and has a wide opening that makes loading at ease. It’s also completely sealed so that it prevents any oil or vapor leakage into the electronics.

The coil is made from a neutral material, Quartz, which preserves the purity of the wax. It’s one of the recommended types of coils for dabbing since it has a fast heat time, easy-to-clean, and provides the balance of flavor & vapor production.

It also has a built-in temp sensor similar to the recently released Peak Pro by Puffco. The built-in temp sensor is responsible for keeping the exact temperature while vaping and prevents the atomizer from overheating the wax. Later in this review, we’ll be comparing the Peak Pro and the Boost EVO since I believe that they are one of the few contenders for the crown of glory.

The Boost EVO features a borosilicate glass bubbler that’s wide enough to store the required water volume to produce cleaner and less harsh vapor. It’s also durable and heat-resistant but be careful not to accidentally drop it while cleaning or assembling since too much force might break it. It features a curved mouthpiece, which makes it easier and feels natural to take a rip.

As I’ve mentioned above, a magnetic adapter connects the water bubbler on the base- this makes it easy to disassemble or even load a dab for another session. The magnetic adapter is also designed to make the vapor path away from any electrical circuits that might affect its purity. It also features an airflow hole in the middle to control how loose or tightly you inhale.

If you’re using a portable dab rig for the first time, here are the required steps:

Stealth Mode: If you want to have a discreet session and turn off the LED lights, press the power button twice.

If you’re vaping extract, it’s recommended to clean your unit frequently to achieve the best result possible. To clean the Boost EVO, you need to:

Cleaning your Boost EVO also helps with preserving its longevity. Another thing that you need to know is when to replace your atomizer. Here are the indications that your atomizer may need to be changed:

I can’t help but compare the Boost EVO and Puffco Peak Pro (Review) since they are the first portable eRigs released for 2021. Here’s a quick summary of the comparison:

Overall, the Boost EVO and the Peak Pro have their own ‘bread and butter,’ and choosing between the two is a matter of preference. So if you want an eRig that’s easy to assemble and doesn’t need any tweaking, the Boost EVO is suitable for you. But if you want full control over your session and don’t mind the complexity of setting it up, I recommend opting for Puffco Peak Pro. Nevertheless, both of them produce fine-quality vapor than most older models.

The Boost EVO is a plug-and-play device with no expensive gimmicks or whatsoever but has the necessary features to be a reliable and convenient eRig. It heats up fast while efficiently vapes the concentrates. You can control the draw resistance as you inhale, and on top of that, the curved mouthpiece makes it more comfortable to take a rip. Finally, the real-time temp control helped precisely keep it at the desired temperature and prevent the wax from getting burned.

As for the vapor quality, the EVO is a heavyweight- it produces intense and tasty vapor, which is perfect for high-temperature dabbing. For beginners, I suggest you stick to the bottom two temp levels since these are the sweet spot between flavor and vapor production. Any higher, you’ll get stronger and intense hits and would probably knock you out until the next day.

Battery Performance: As I’ve mentioned before, the EVO could last up to 2-3 days of casual use, which is decent for solo sessions. If you plan to use this in a party or group session, it will probably last an hour or two of continuous use. Lastly, the good thing about the EVO is you can use it while it’s charging. So even if you use it for a long time, as long as there’s a wall socket or power bank, the party won’t stop.

Dr. Dabber (Visit Store) once again proved to the dabbing industry that they are the force to be reckoned with when releasing the EVO. As you can see, most of their previous releases, such as the Dr. Dabber CBD (Review) and the Stella (Review) are top-performing products in their respective category.

Overall, the Boost EVO is designed to be a simple and straightforward device yet powerful enough for advanced and heavy users. It may not have some high-tech features like a smartphone app or wireless charging, but it can produce unparalleled vapor quality. In my opinion, the Boost EVO is the catalyst of EVO-lution of portable rigs, and I won’t be surprised if it’s labeled as one of the finest eRigs this 2022. 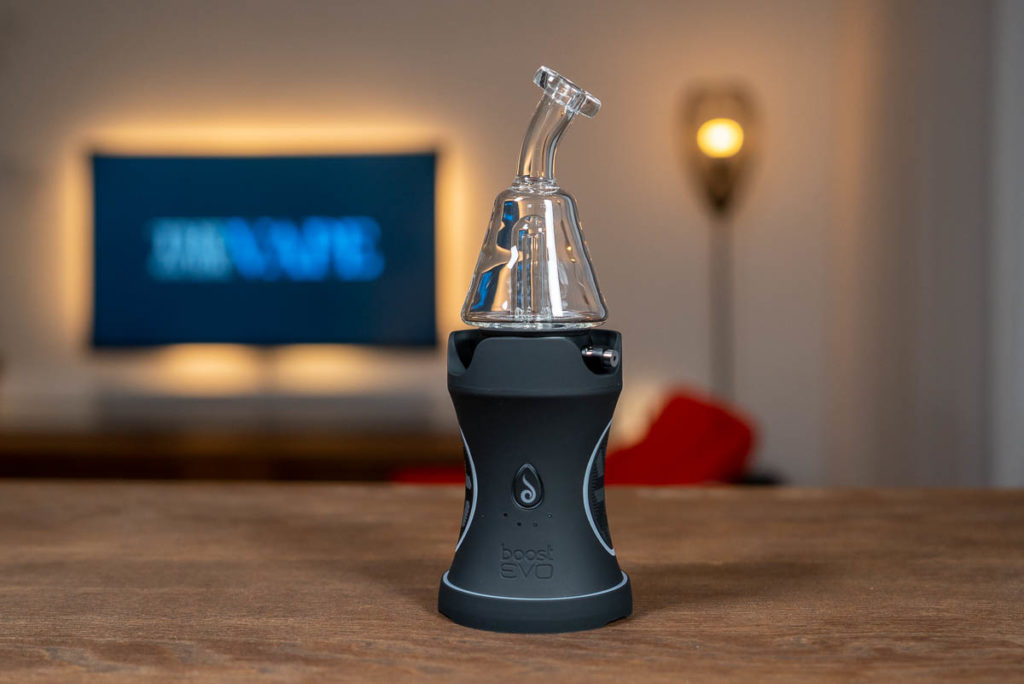 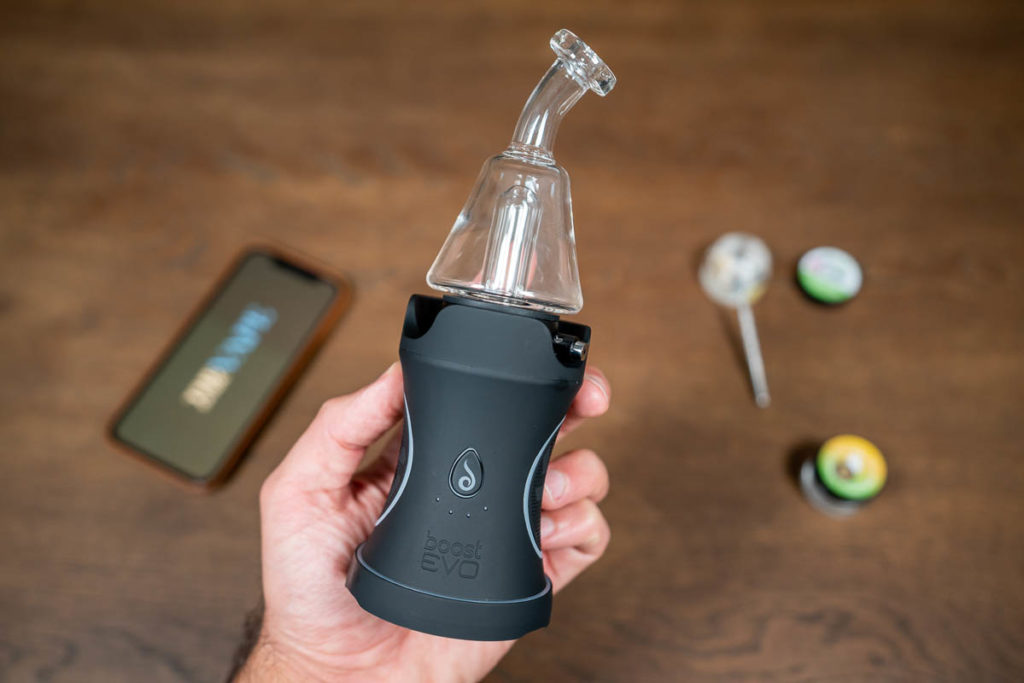 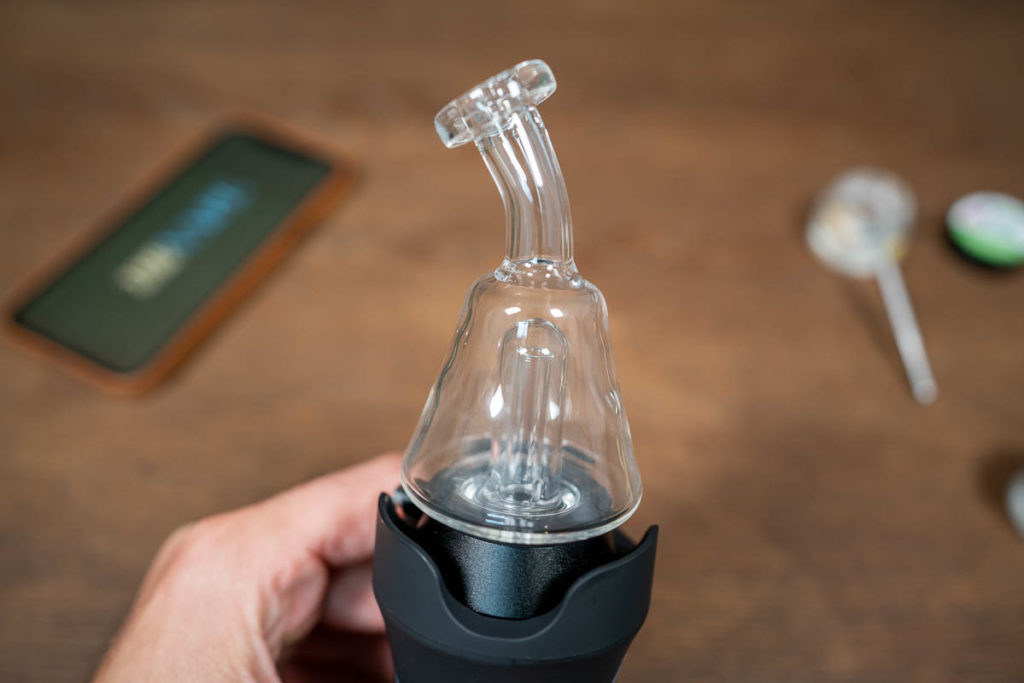 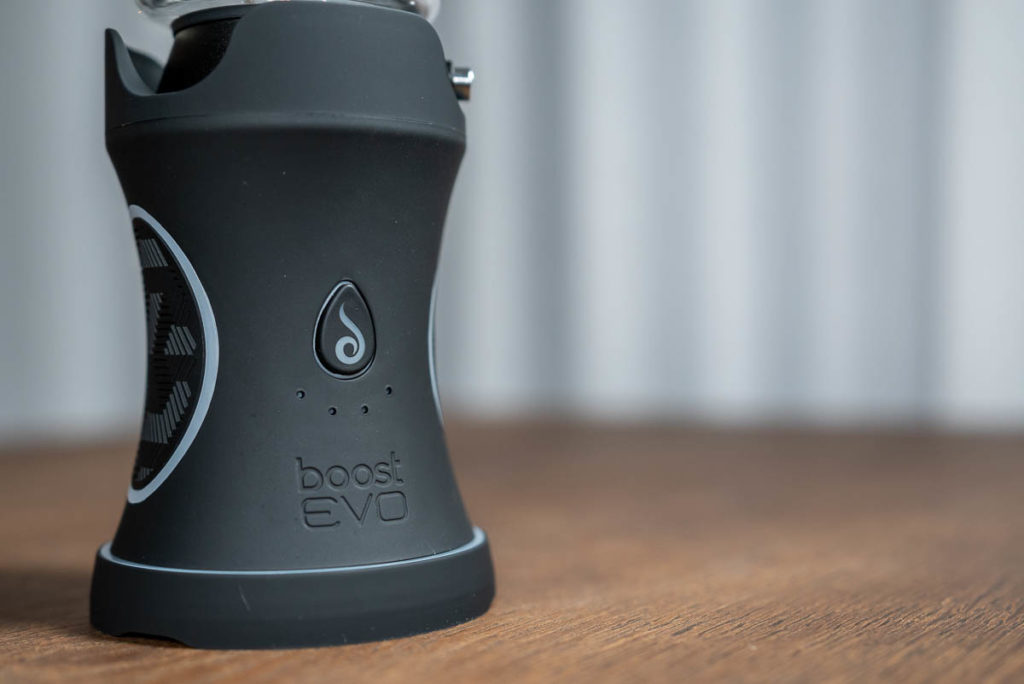 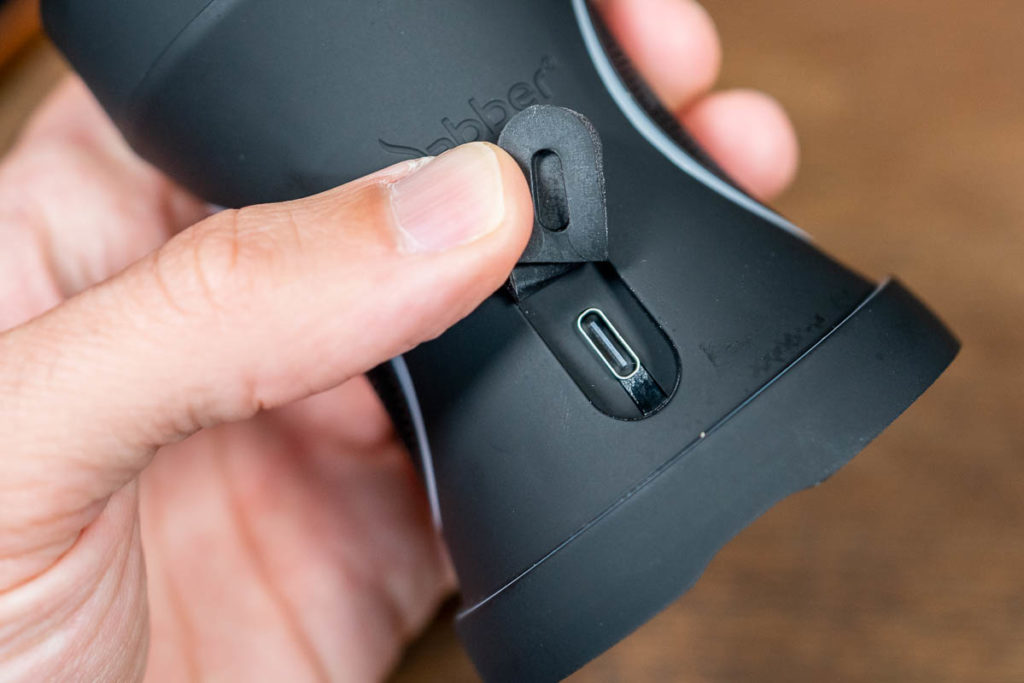 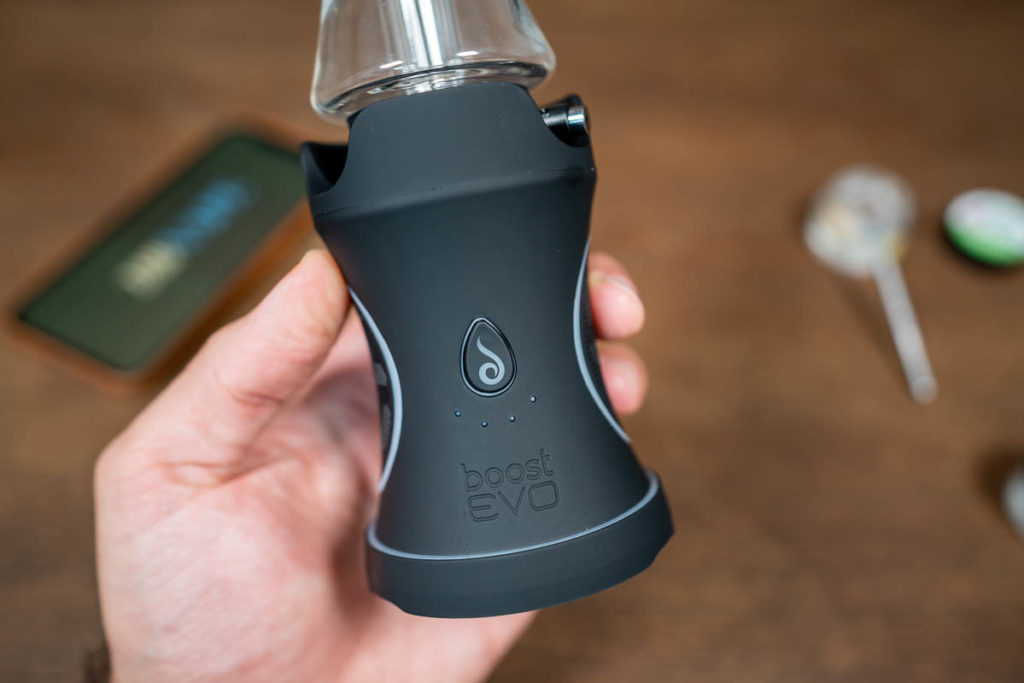 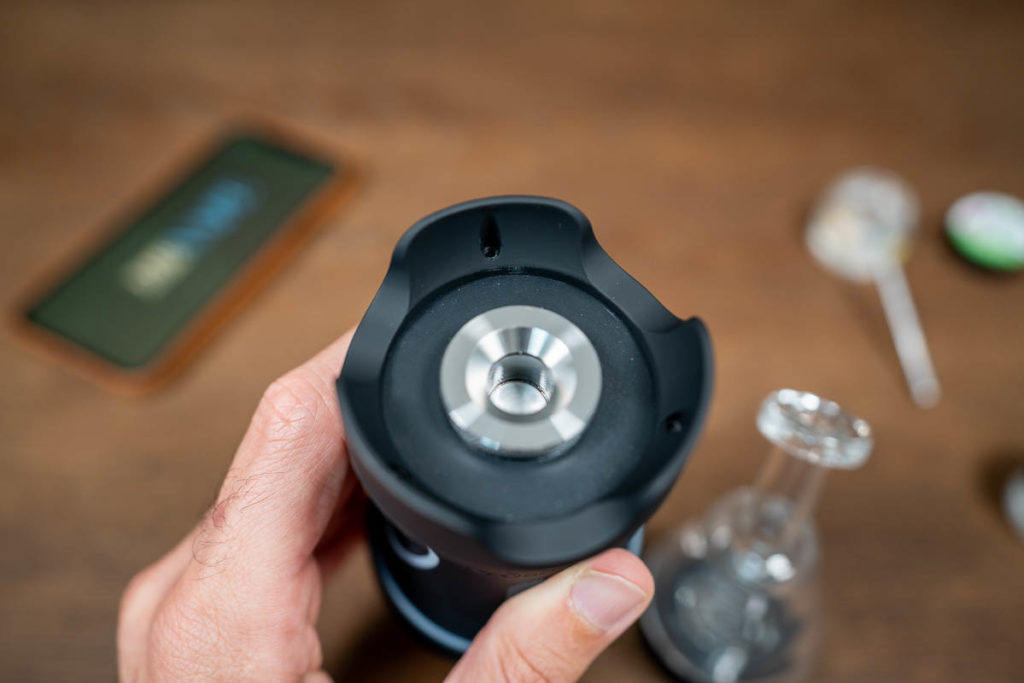 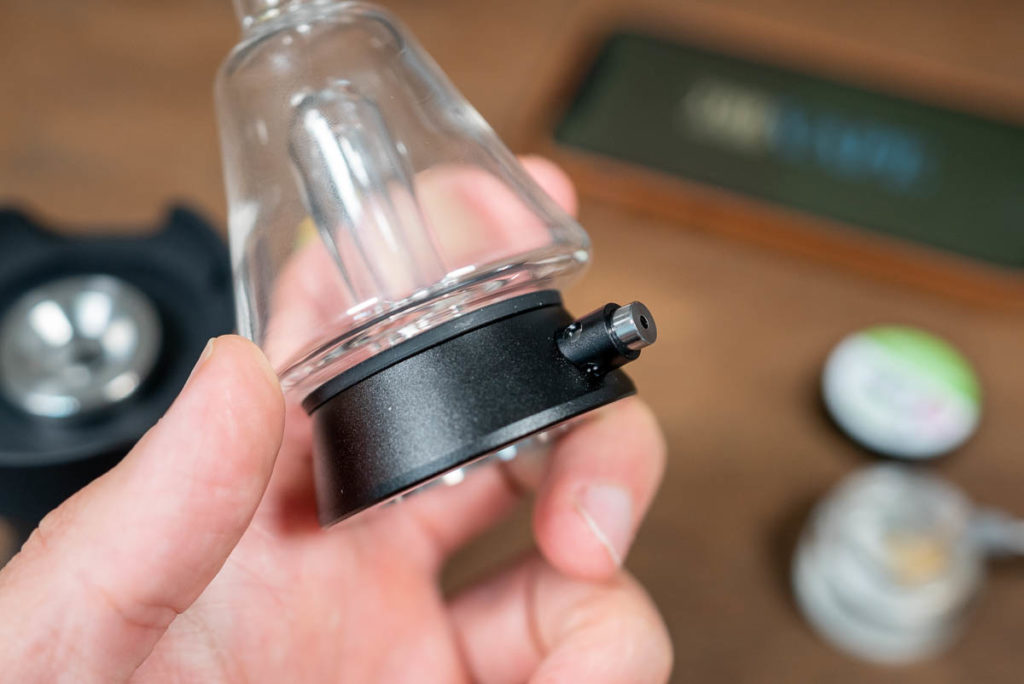 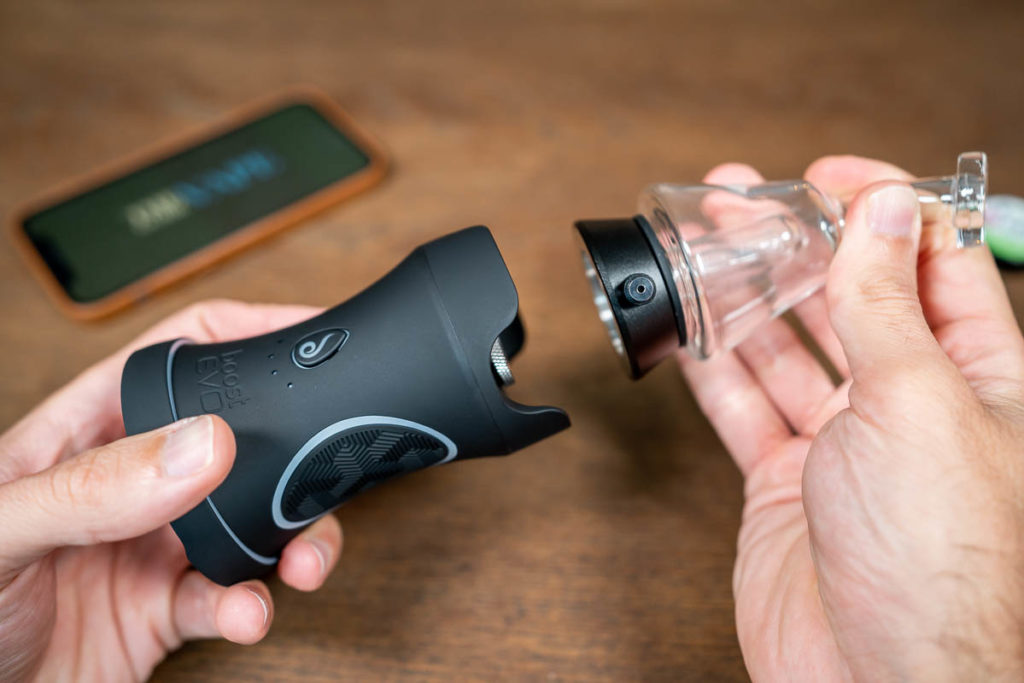