4.8 4.8/5
The Arizer Go, or the ArGo is an ultra-portable, mid-tier vaporizer that features a convection/conduction heating system, variable temperatures, and an OLED screen. It employs the same neutral glass mouthpiece that’s found on most Arizer products but differs from its siblings by having a recessed mouthpiece that tucks safely away into the device.

Released in late 2018, the ArGo has been around for a while, and I myself have been using it on-and-off since. After some use and wear and tear, the Argo seems to be holding up well- much like the rest of Arizer’s earlier releases. Since the ArGo follows such a strong line-up of products, expectations tend to be high for this little device. The ArGo has some Arizer signature features such as hybrid heating, full control digital display, precise temperature controls, and anodized aluminum parts. It also has a few of its own stand-alone key features such as swappable 18650 batteries, and a pop-up glass mouthpiece.

Compatibility: The Arizer Go is compatible with dry Cannabis herb, I tested this product with CBD herb from InHemp and THC flower (wedding cake), from my local dispensary.

*CBD is legal to ship across all 50 states.

Like most Arizer products, the ArGo comes with a pretty substantial kit and enough spares to last you a good while. The included USB charger also includes a dedicated wall outlet adapter- something that’s a usual addition to most vape kits.

The standard ArGo Kit comes with the following:

The ArGo is handsomely designed. Made with a combination of hard plastic and anodized aluminum parts – the ArGo is sleek, compact, with clean lines, and an understated two-tone monochromatic finish. At only 4 inches tall (regardless of whether the mouthpiece is propped up or not), there’s no doubt that this little device is portable and pocket-friendly.

The short mouthpiece and the mouthpiece guard on the ArGo are definitely convenient, especially in comparison to other Arizer models. On earlier Arizer vapes the oven sat at the top end of the device with the glass stem exposed several inches up from the body. It serves the same function on the ArGo as it does on those larger vapes, in that it makes herb loading extremely easy and the neutral material definitely keeps the vapor pure. For a little added convenience you can preload the mouthpiece with herb and store them using the included stem caps to seal off the filling end.

Once any user hears “glass mouthpiece on a portable vape” their next thought is probably about breakage. But on the ArGo, that’s not a problem at all. The mouthpiece guard pops up to conceal the mouthpiece and then simply pops into the device simply by pressing a button located at the back. Simply push the guard down again when you’re good to vape.

At the front of the device is a clear OLED screen that displays information about which temperature you’re on and the device’s battery level. The buttons are located at the bottom of the display and are quite tactile and firm.

The ArGo’s battery lasts for about ninety minutes, which is the average for most portable vaporizers. It takes about three and a half hours to charge, which is well above average for most portable vaporizers. Fortunately, the battery (buy on amazon),  is removable and replaceable. So you can just swap in a new one if you don’t feel like waiting for the dead battery to recharge or you can get a 18650 battery charger (buy on amazon), and always have a fully charged spare waiting.

The Arizer Go’s temperature may be altered in increments of one and holding either + or – buttons for 10 seconds, jumps the temperature by 10 at a time.

Much like its older siblings, the ArGo is a pretty low-maintenance vape. Since it’s loaded by dipping the mouthpiece onto the herb, there isn’t a herb chamber that you need to worry about cleaning. The mouthpiece simply needs to be cleaned every few uses.

For a quick clean, use a q-tip to wipe the inner surface of the mouthpiece. For a more thorough clean, dip the q-tip in isopropyl alcohol before starting. Try to clean the mouthpiece while it’s still warm, if you wait too long, the resin will cool and harden, making it much tougher to clean.

The ArGo’s vapor quality is astounding and this is all thanks to the convection/conduction heating system and glass mouthpiece. I found that I got the most balanced vapor (in flavor and density) at 370°F to 390°F. Any lower than 360°F and the flavor is not strong enough, and at temps higher than 400°F, the resulting vapor begins to get harsh and uncomfortable.

The vapor does get a little warmer in the Argo than it does in the other Arizer vapes because its glass mouthpiece is understandably shorter, closer to the battery and the heating element. On other Arizer devices, the entire mouthpiece is outside the device – as opposed to encased in it- like on the ArGo.

The vapor never feels uncomfortable, but if you’re used to the Solo 2 or Air 2, then you might be surprised. Although, compared to other portable weed vapes, it’s relatively alright. It takes roughly a minute to heat to the selected temperature, which is oddly long for portable vaporizers and it does quite warm to the touch after subsequent use – which is quite fair considering how small the device is. Draw resistance on the ArGo is also quite low – as long as both the mouthpiece and the screen are clean. So if you’re looking to keep the draw resistance to a minimum, consistent cleaning is necessary.

The ArGo comes from a long line of great vaporizers by Canadian brand Arizer, so the bar is definitely set pretty high here. For something this small, the Arizer Go is a worthwhile vaporizer that produces well-balanced vapor and truly maximizes its convection/conduction heating system.

At $165, it classifies as a mid-range vaporizer that’s suited for any user regardless of whether you’re a beginner or an expert. Between the portables in Arzer’s line-If you’re looking for something portable and discreet, the ArGo definitely fits the bill. For cooler and more flavorful vapor, I’d highly suggest the Solo 2 or the Air 2. For a full view of the differences between Arizer devices, check out our Arizer Go vs Arizer Solo 2 vs Arizer Air 2 comparison.

Argo https://thevape.guide/store/potv-arizer Which is better?

The Arizer Go, or the ArGo is an ultra-portable, mid-tier vaporizer that features a convection/conduction heating system, variable temperatures, and an OLED screen. It employs the same neutral glass mouthpiece that’s found on most Arizer products but differs from its siblings by having a recessed mouthpiece that tucks safely away into the device.

The Solo 2 is a session-style vaporizer with a hybrid convection/ conduction oven that delivers dense and flavorful vapor. Design-wise, it’s definitely on the more functional side of the spectrum. The Solo 2 has two main parts; the body (which features an OLED display) and the glass mouthpiece. Since the mouthpieces dampen its portability - this device is recommended as a dependable at-home vape. 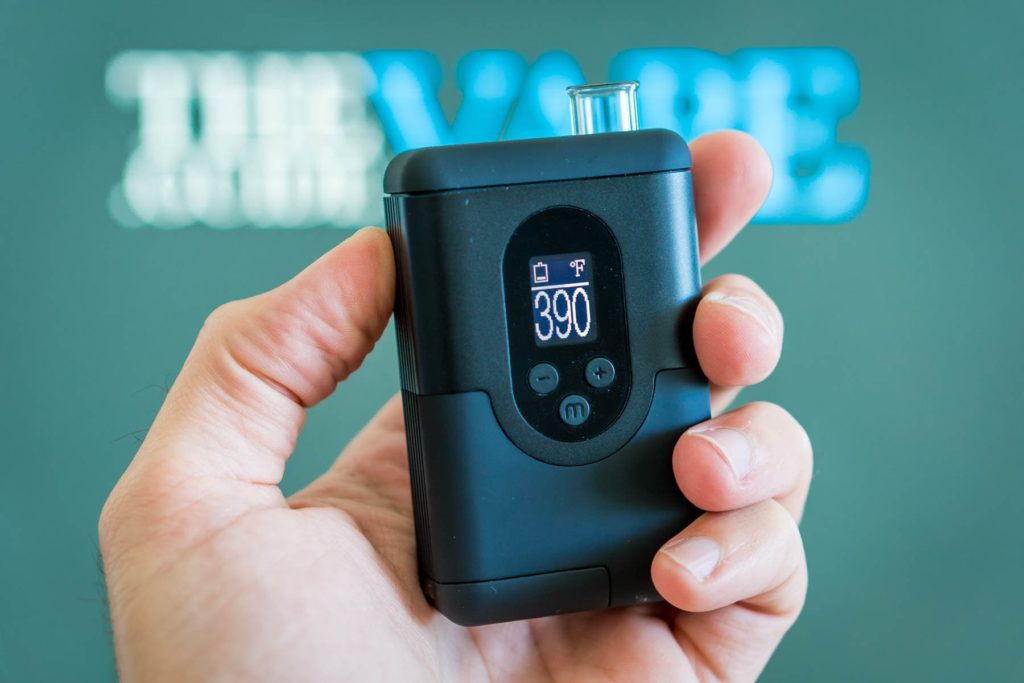 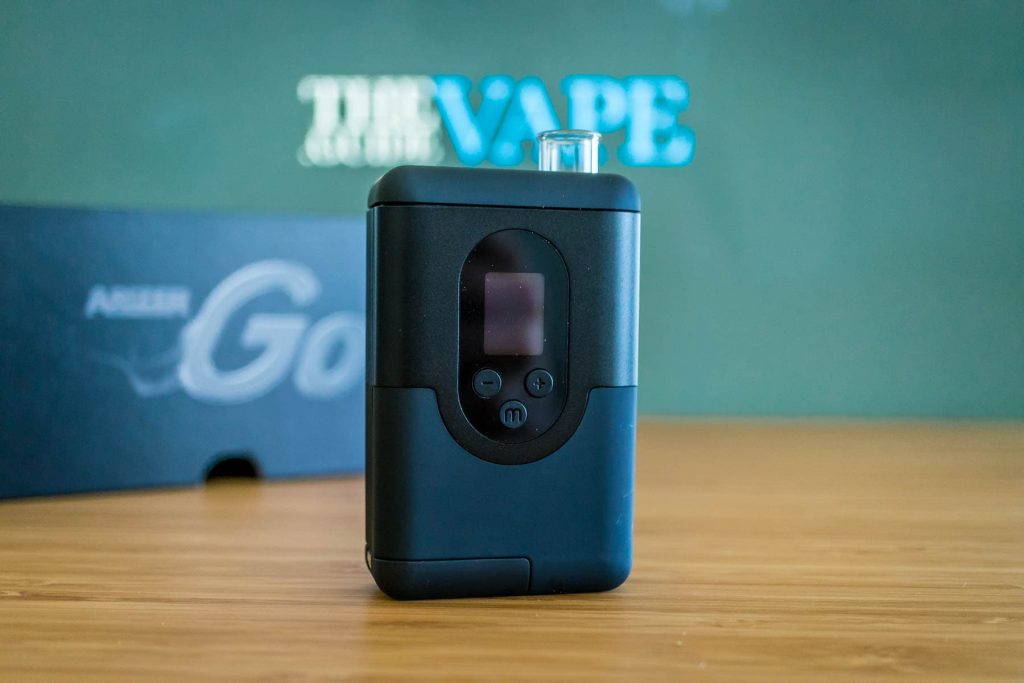 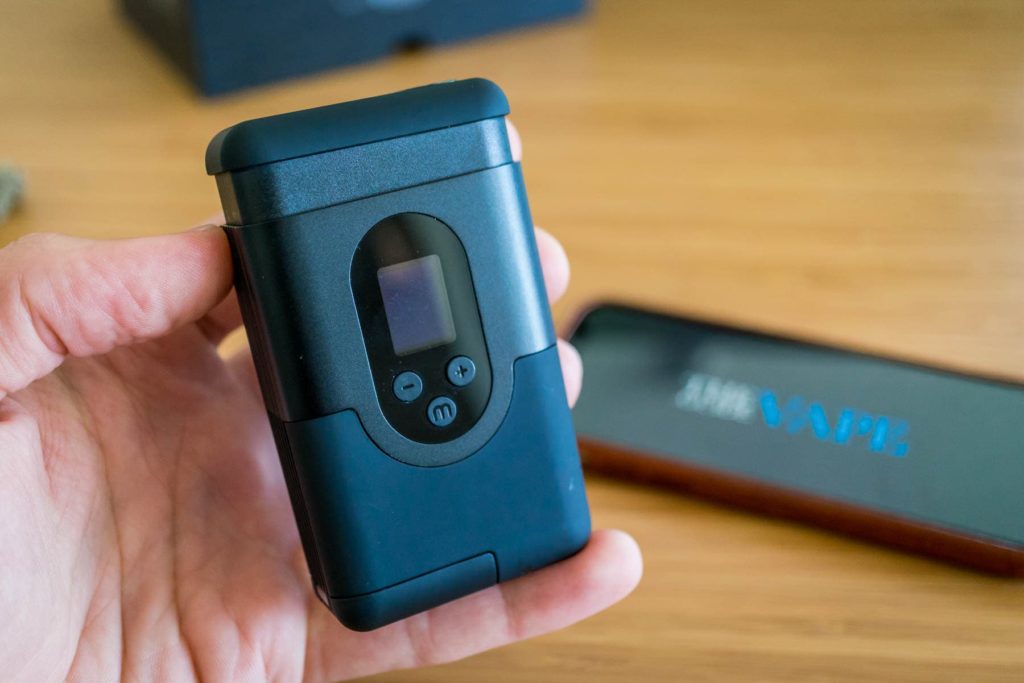 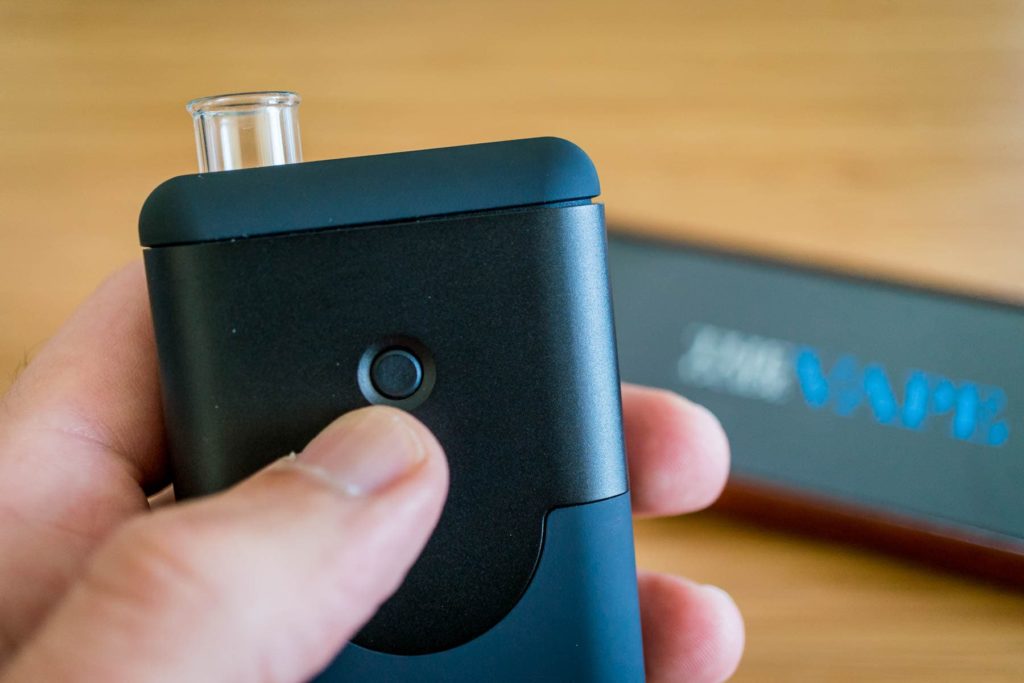 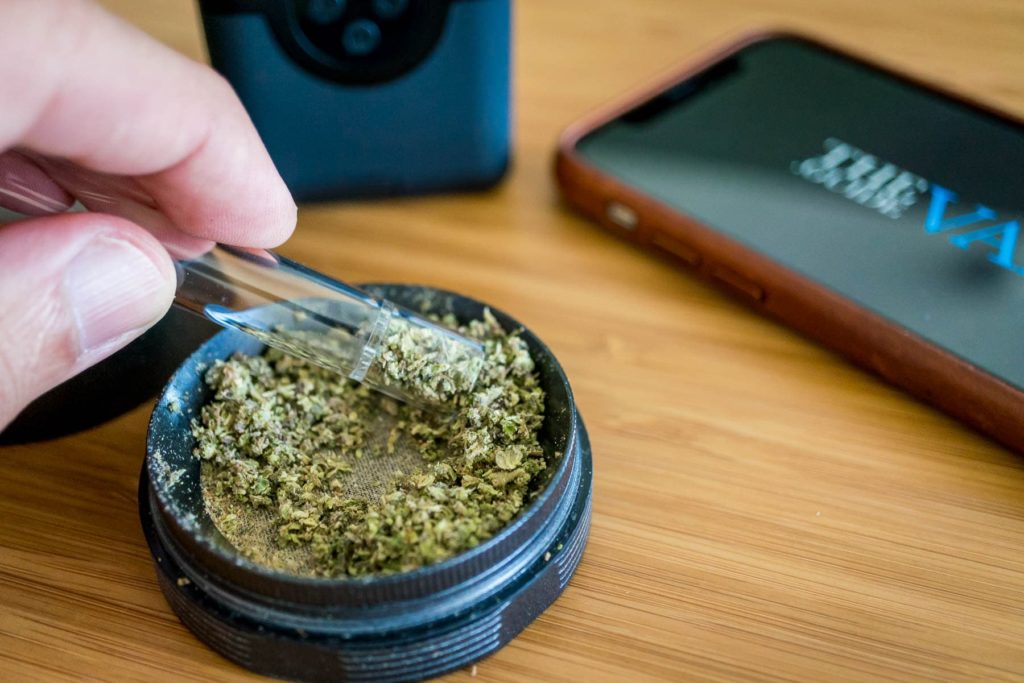 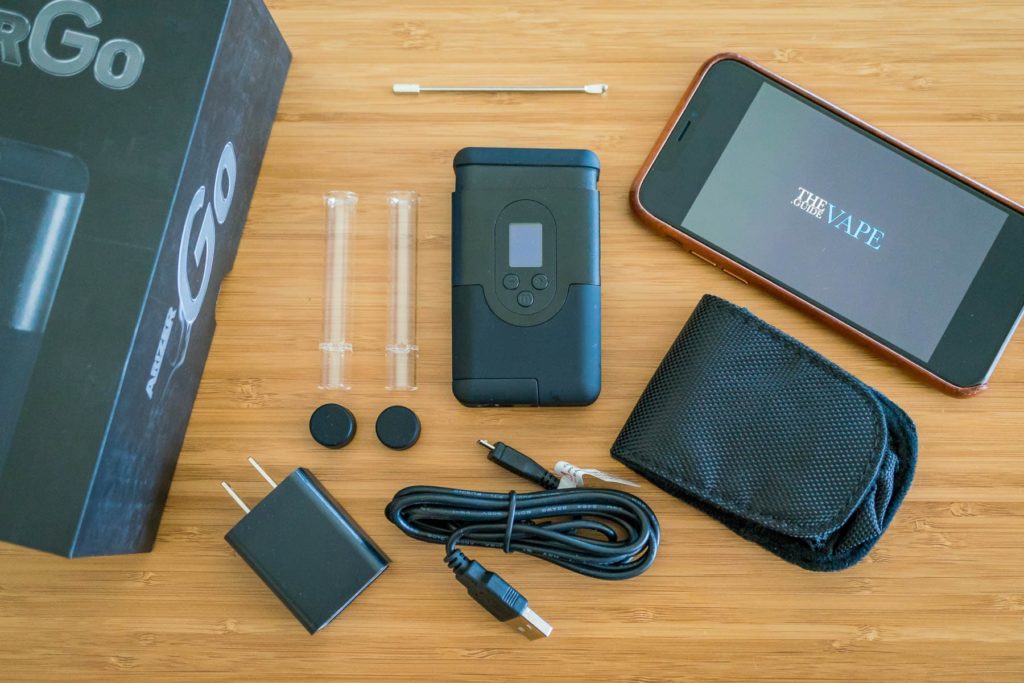 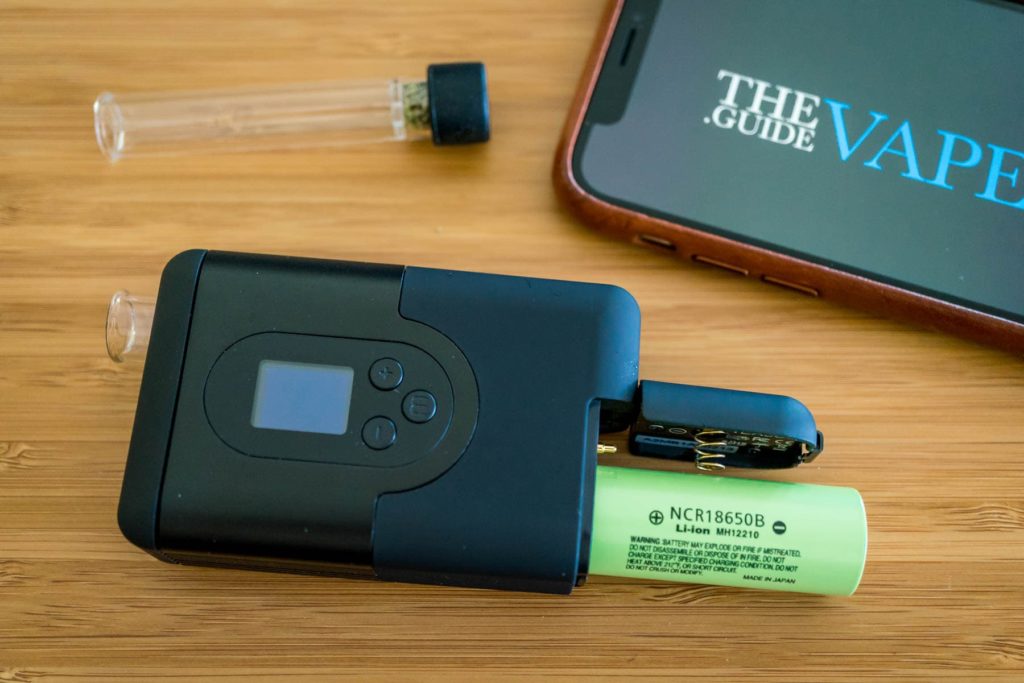 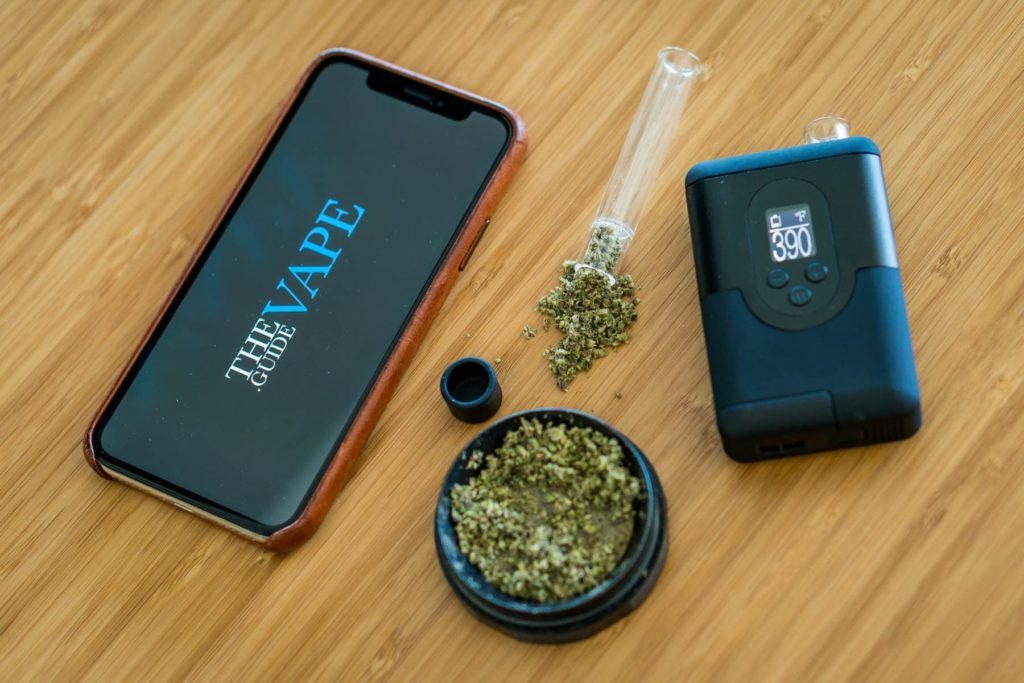