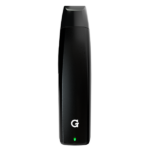 Design: The Pro has a simple, but streamlined design that eschews the boxy design of most weed vapes. The Pro has a more cylindrical design that feels good in the hand. It also has a single power button to control all the functions of the vaporizer and a column of three vertically placed lights to indicate temperature and battery status. Loading the Pro is easy as well since you just need to snap off the mouthpiece to expose the herb chamber.

Features: The Pro doesn’t really have any standout or unique features, it’s a simple, easy to use weed vape, and that is its best quality.

Design: The Elite has a sleek, ergonomic design where each contour seems to be perfectly molded to the user’s hand. The power and temperature control buttons are well placed and the LED display is clear and informative. The smooth design means that it is nicely portable as well, which just adds to its convenience. The cherry on top is that it’s really easy to use as well.

Features: The sleek design is the most outstanding feature of the Elite. It’s a fairly basic vaporizer otherwise, but that’s hardly a bad thing, if anything, the combination of style and simplicity is highly appealing.

G Pen Pro and G Pen Elite: Both these vapes are easy to clean and they are cleaned in the same way. They both have a cleaning brush included in their kit that is used to clean out the herb chamber. Just run the brush around the chamber a few times, and you’re done.

No wax compatibility here, all three of these are strictly dry herb vaporizers.

G Pen Pro: The Pro is constructed from aluminum so it feels nice and durable. The aluminum finish is fingerprint-proof as well, so that’s one less bit of cleaning that you need to do. The mouthpiece is made of plastic though and it gets a little warm after a few minutes of use.

G Pen Elite: The Elite is also made from aluminum, but it is covered in rubber, which gives it a firmer, more secure, and more comfortable grip. It has a plastic mouthpiece as well and the same warming problem applies here as well.

G Pen Pro: The Pro has a ceramic oven capable of holding 0.25 grams of herb, which is a great amount for solo users. Impressively it uses convection heating, which isn’t usually the case with these mid-tier vaporizers.

G Pen Elite: The Elite also uses convection heating and has a ceramic oven. However, it can hold 0.75 grams of herb, which is three times as much as the Pro. It’s a good amount for more advanced vapers, so beginners should take it easy the first time they use this.

G Pen Pro and G Pen Elite: Not surprisingly, these two vaporizers are pretty similar when it comes to reliability. They are both simple two-piece devices so there aren’t a bunch of components or moving parts to worry about. And since they’re both made from aluminum, you don’t need to worry about impact damage.

G Pen Pro: The Pro has a battery life of 2200 mAh that is good for about three to four sessions. It takes a while to charge though, you’ll be waiting for about three hours before it’s ready again.

G Pen Elite: The Elite also uses a 2200 mAh battery, but you can squeeze up to six sessions out of it. And like the Pro, the battery takes around three hours to recharge.

G Pen Pro: The vapor produced by the Pro tastes good thanks to the convection heating. Unfortunately, the flavor doesn’t last long and begins to fade after a few draws. The best results are on the lower temperature settings, both because the flavor is better there, and also because the mouthpiece doesn’t get as hot.

G Pen Elite: The Elite also uses convection heating, so the flavor is good, but thankfully it lasts longer than it does in the Pro. The same mouthpiece warming issue is present though since the mouthpiece is right above the oven and the vapor path is short.