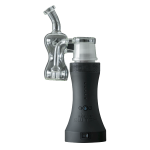 At the prices they come in, it makes sense that they both come with kits that are beyond basic and match the spend.

Everything in the Switch’s kit may be replaced and is available to purchase on the Dr. Dabber website. Once you’ve mastered the use of your Switch, there are also add-ons like brand new bubblers, carb caps, and bubbler bases that are available if you’re looking to get creative. Save 15% off your total bill with our coupon code TVG15

The Switch comes in a large box and contains the following:

The Peak Pro’s kit comes with a well-designed case, and It’s clear that a lot of thought went into making the case. The case snaps closed easily with magnets and stays open like a book. There are also magnets underneath the hinge that keep it open and turn the case into a small working area for prepping.

The Peak Pro’s optional accessory lineup isn't quite as extensive as the Switch’s but they are still worth checking out. You may opt to purchase the Power Dock (buy) for $120, which is a wireless charger that also comes with its own battery. So the Peak Pro continues charging even while it’s unplugged. On the accompanying smartphone app, you can opt to set the Peak Pro to start heating as soon as you remove it from the charger. There’s also an optional Travel Kit (buy) available and it contains silicone storage for your cleaning tools and dabbing tool, an angled silicone mouthpiece, and a hinging tether to keep the carb cap in place.

Both of these devices feature some incredibly unique design work that matches the premium build quality. While so many vaporizers today are designed sleekly and with minimalism in mind - both the Switch and the Peak the exact opposite.

The Switch’s main body features a deep center curve that’s essential to its functionality. The curve makes the entire device easier to grip- especially when you consider its massive size of 10 inches or 13 inches with the bubbler attached. The many heating modes are indicated through the 5 LED lights that are vertically stacked above the main button. The entire device is controlled by the said button and by two temperature control buttons on either side.

The Peak Pro on the other hand is less loudly designed than the Switch, but it’s still far from minimalist. At first glance, it resembles what it truly is- a peak. This angular device is made from three main components- the glass, the base, and the coil. The whole thing stands at 7″ tall and just under 3″ wide.

The glass component is made from heat-resistant borosilicate glass and holds a good amount of water which helps in producing a smoother hit. The wide base makes the entire device more stable, so it’s less likely to tip over. Located at the front of the base is the firing button (under the coil) and has the Puffco logo at the back, as well as the USB-C charging port. It also has an LED ring at the button which indicates the current temperature setting and device status.

The Switch and The Peak Pro have relatively long battery lives. Although, the Switch’s battery is more superior. Thanks to energy-efficient induction heating, the Switch battery is good for 150 dabs on a single charge and charges in a record 60 minutes.

The Switch has a staggering 25 heat settings and the induction system has heat times that can go as fast as 3 seconds on the lower setting and 12 seconds on the higher settings. The kit only includes a ceramic nail, but you may opt to purchase a quartz nail separately. While the nails do seem quite small, they hold a substantial amount of wax.

The Peak has four heat settings and an average heat time of 20 seconds, this is quite fast, though it seems glacial in comparison to the Switch. It also only includes ceramic bowls, but again- holds more than enough material for a session.

Between both these devices, the Puffco Peak Pro is definitely the more portable of the two. The Switch is about a foot tall and has an incredibly wide body while the Peak Pro is only about 7 inches in height. The carrying case also makes the Peak Pro the ideal dab rig to bring around for an outdoor session or a party.

Using the Switch requires a bit of practice, especially if you want to maximize its 25 heating modes. Cycling between these modes is also a little tricky since you only have the three provided buttons to toggle through. If you’re looking to use multiple dabs, you will have to remove and reinsert the nail each time you want to add another dab.

Using the Peak is much simpler and direct-loading is quick and easy as well. With the smartphone app, you can customize heating profiles, change the profile names, set the temperature anywhere between 450F and 620F, set the heating duration from 15seconds to two minutes, and change the colors and reduce the brightness of the LED lights.

The app also allows you to activate boost mode, ready mode, and even activate a fun party mode which makes the LED lights shine in rainbow colors.

One of the Switch’s best features its advanced induction heating method. As of this writing, no other device currently has this feature.  Induction heating is an advanced heating method that uses electromagnets to heat coils, inside of which is a receptacle that holds the wax. As mentioned earlier, the Switch heats up in record time. The device heats up to any temperature from 300°F to 800+°F in a record 3-4 seconds.

That’s a lot faster than any dab rig on the market and definitely faster than the Peak Pro. The resulting vapor is of the best quality and is very flavor-forward, even more so on the lower, flavor-optimized settings. At higher temperatures, the vapor is thicker, denser, and never uncomfortably warm. The included bubbler does a great job of filtering and further cooling the resulting vapor no matter the temperature you choose.

However, as for its performance with dry herb- it’s slightly underwhelming. Nowhere near its results with dab and is no match for the best dry herb vaporizers. While that shouldn’t put anyone off- it’s best to stick to using the Switch with concentrates.

The Puffco Peak Pro’s performance is very impressive for its size and the real-time temp control is a true game-changer. Allowing you to change temperatures throughout your session and taste the different flavor notes and nuances of your material. For most users, I’d highly suggest sticking to the two lower temperature levels- this is where the sweet spot is for vapor production and a well-rounded flavor.

At the higher temp levels, the vapor quality remains great but you will end up sacrificing some flavor to the heat. Overall and at any level, the Peak Pro’s vapor quality is top tier.

Both the Puffco Peak Pro and the Dr. Dabber Switch represent the best amongst dab rigs. They both produce excellent vapor that’s well balanced in both its flavor and density. With both of them priced at $400, it all comes down to deciding if you’d prefer a smaller dab rig or a larger one. Though of the two, the Switch’s induction heating technology makes it more worth the spend and the clear winner of this comparison.

Due to induction heating, the Switch’s heating setup is modified to make the separation of the electronics and the heating element possible- so there’s no way for mechanical failure to happen due to leakage. Guaranteeing the longevity of your device and investment.

The Puffco Peak is the more portable device- so if you’re a user who prefers to carry around your rig for trips and such- this might be the right device for you. If you’re still looking around, check out our list of the best e-rigs and e-nails of 2022.

Vape-Smart
COUPON
TVG10
$359Official Store
Vapor.com
COUPON
TVG20
$319Official Store
➤ To use a coupon, copy the code to your clipboard, click the button to visit store, and paste during checkout. Coupon not working? Let us know.

Vape-Smart
COUPON
TVG10
$359Official Store
➤ To use a coupon, copy the code to your clipboard, click the button to visit store, and paste during checkout. Coupon not working? Let us know.